Back in April, I wrote about the poor start to Alcides Escobar‘s season, and how Jarrod Dyson’s presence on the basepaths could lead to more fastballs on which Escobar could feast. Things haven’t gone quite as planned, however, with Paulo Orlando receiving more playing time in right field, and a combination of batters in the nine-spot.

It’s not that Escobar hasn’t had plate appearances with runners on base. Quite the contrary, actually, as the Royals have gotten more production out of the ninth spot in the order than any other team, with a .768 OPS, and their .346 OBP is 18 points higher than the second-best team.

Escobar has had men on the bases in front of him – 121 times, to be exact – but because Dyson has only been that man about one-fifth of the time, one may assume pitchers will have continued their reluctance to throw him fastballs as often as they had in prior seasons. As a reminder, Escobar is seeing less hard stuff this year (per Brooks Baseball) than he has in any season as a major-leaguer, with the exception of his nine-game stint in 2008. 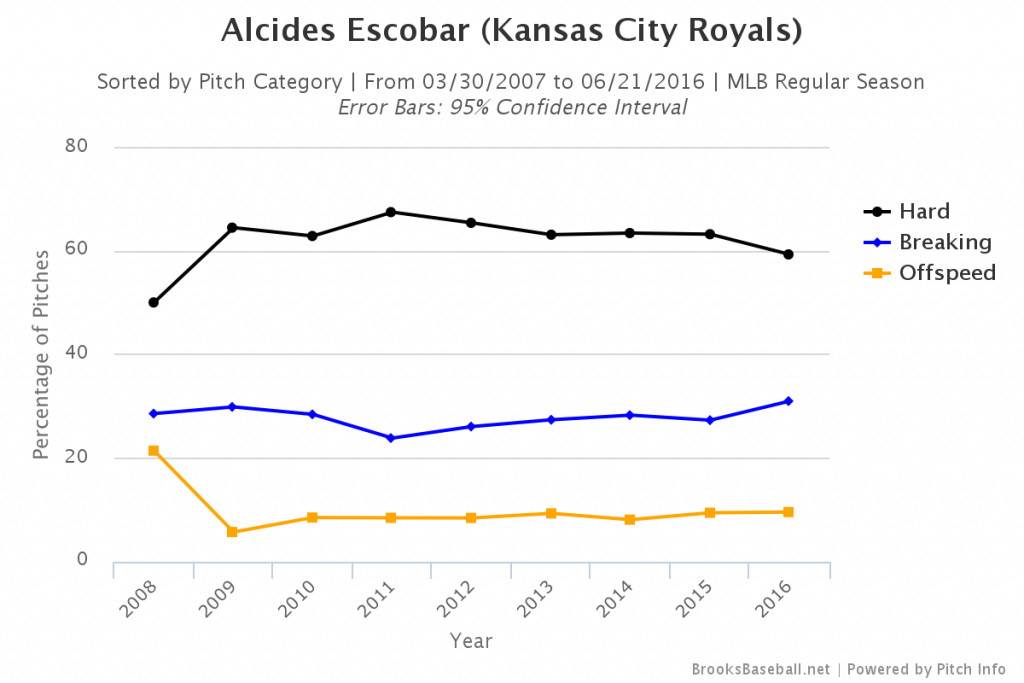 Considering the circumstances, this all makes sense. But let’s look at this season’s numbers, by month. 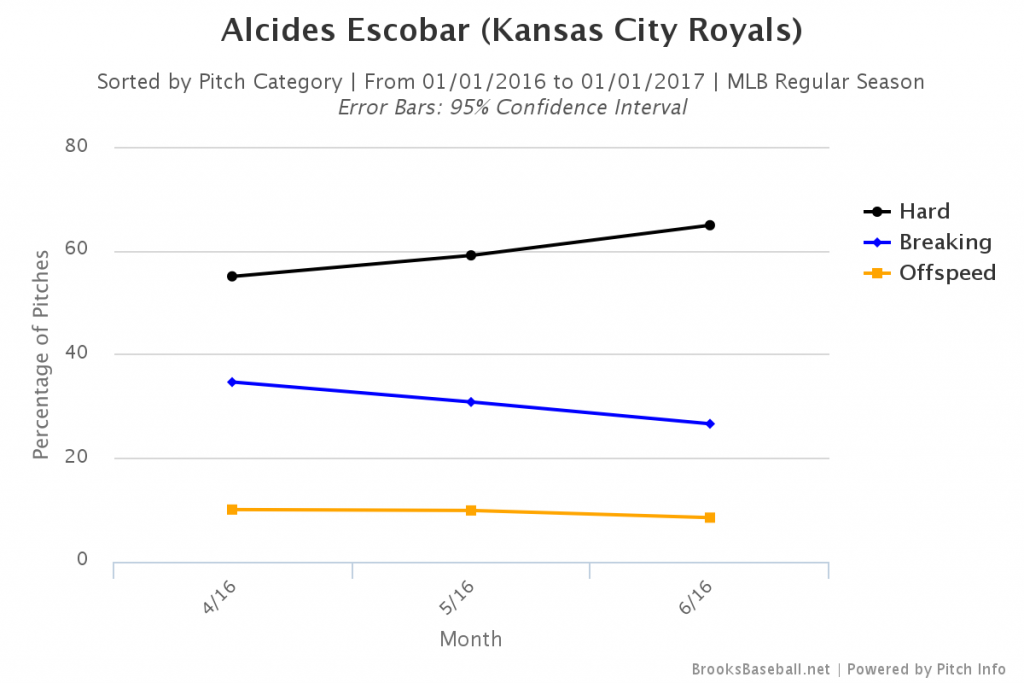 That black line is going the opposite direction of what I expected. With Escobar’s hacktastic ways, I assumed pitchers would simply stick with their plan of throwing him junk, rather than risk him making good contact on a heater. However, pitchers have gone back to being aggressive against Escobar, throwing him some type of fastball almost two-thirds of the time in the month of June. Theoretically, this is great news for Escobar. After all, he’s always had the most success against fastballs throughout his career. Theoretically, being able to see more fastballs should have resulted in more hits and more overall production. Theoretically.

Pitchers have been offering help to Escobar, and he has rejected their offers, over and over again. Those numbers were captured prior to his two-hit game Wednesday, but they didn’t move the needle much.

Despite seeing a heavy dose of fastballs, Escobar has continued to struggle mightily at the plate, as he has all season. Sure, he’s had a couple of week-long hot stretches, but they’ve never been enough to pull his overall line out of the depths of Hades.

Now, you’re probably looking at the end of that stat line and noticing his .227 average on balls in play. Escobar’s career BABIP is .296, and since the start of 2015 it’s been .286, so it may be logical to assume there’s some bad luck involved. I do think Escobar has hit a few balls right at players, but there’s not much evidence that his recent slide is all about luck.

In the month of June, he’s put 70 balls in play. Roughly 29 percent of them have been flyballs, 20 percent have been line drives, 46 percent have been grounders, and six percent have been popups. Yes, I know those numbers add up to 101 percent, but no, it doesn’t really matter. Simply by looking at those rates, one should expect a lower BABIP than normal, since his line drive rate is about five percentage points lower than it’s been in recent seasons. A low liner rate alone doesn’t guarantee a low BABIP, of course, so perhaps we could look at some other factors. Maybe Escobar is making solid contact, and the balls are simply finding gloves. That would be a nice answer, but there’s evidence that suggests otherwise.

According to Statcast data at Baseball Savant, Escobar’s average exit velocity in June is 82.3 mph. That average is only counting 57 balls in play, likely because the equipment tends to struggle with batted balls at very low velocities. Even a lack of data can be a data point. Among the 254 players with at least 25 recorded balls in play this month, Escobar ranks 252nd in exit velocity. That stat isn’t everything, but it is a pretty shiny piece of the puzzle.

Looking only at line drives and fly balls, Escobar’s average exit velocity is 85.3 mph. His grounders have averaged 78.5 mph off the bat. Simply put: he’s not hitting the ball hard enough.

Since the start of June, Escobar is hitting .208 against hard stuff. He’s not hitting well against anything else, either, but with how pitchers have attacked him, you would expect to see better results. Here’s where pitchers have thrown all those fastballs this month: 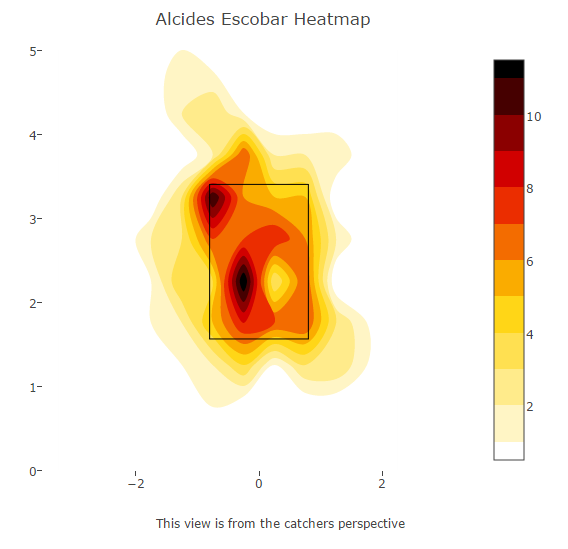 It’s not always easy to square up those pitches up and in, but he’s seeing a lot of pitches in the heart of the plate, and he’s coming up empty. On Tuesday night, Escobar was facing Addison Reed in the 8th inning, and Reed left a 90-mph fastball in the middle of the strike zone. Here is that pitch: 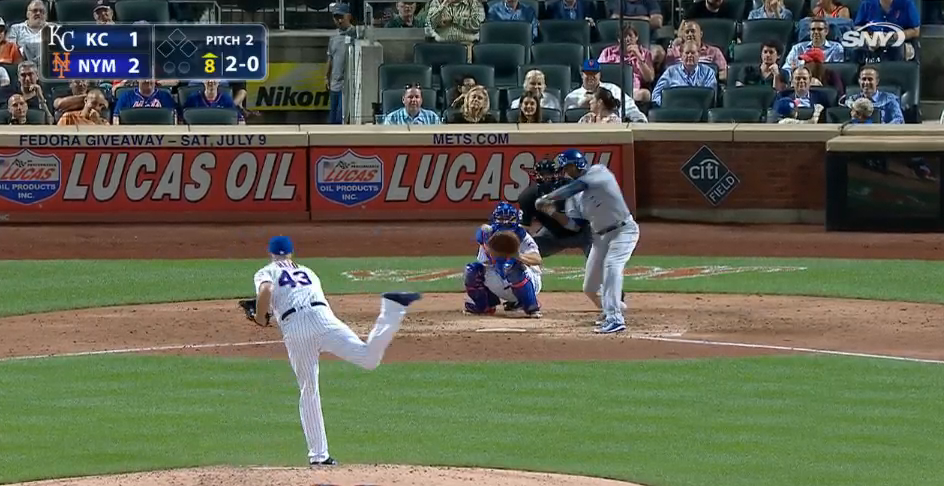 Escobar popped out to shallow left field. You’ll notice that Escobar is late on this pitch, since it’s almost to the mitt and he hasn’t gotten his bat to the zone yet. It seems as if Escobar wasn’t looking for a fastball there, which is strange, since it was a 2-0 count, and Reed throws a fastball more than 80 percent of the time in those situations.

I don’t know if that one at-bat is representative of his entire month, but he certainly has struggled more than usual against heaters in June. He’s whiffed on nearly a quarter of his swings at the four-seamers, after only doing so 11 percent of the time last season. His overall swinging strike rate isn’t out of line with last year’s, but it’s concerning that he’s struggling so much with the kind of pitches he’s been able to handle in the past.

It seems tough to suggest Escobar’s bat is just slowing down, although it is a possibility. To these untrained eyeballs, his bat speed still appears to be good enough. I think the most likely explanation is that his timing is off, partly due to poor pitch recognition. Escobar has never been a disciplined batter, but he’s chasing far more pitches out of the zone than he ever has before (39.4 percent chase rate this year, 33.9 percent in his career), which suggests to me that he may be guessing more often.

My theory: He recognized that pitchers were feeding him more offspeed stuff earlier in the season, so he started looking for more of it. In the last several weeks, he’s getting more fastballs, but because he’s not looking for those as often, he’s late in starting his swing, which is affecting his timing, which is leading to poor contact and more whiffs.

If that is the case, it should be a relatively easy adjustment to get back to hunting fastballs. He could still adapt if he picks up spin, but this way he could punish a mistake like the one Reed made the other night.

I think it’s fair to say Escobar won’t be a very productive hitter this year, but if he can at least return to hitting fastballs, he can provide a little value at the plate on occasion. It won’t be enough to justify his position near the top of the batting order, of course, although that’s a discussion for another day. For now, the Royals simply have to hope Escobar has reached his nadir, and that he can make some tweaks to climb out of the season-long slump in which he’s mired.

”
According to Statcast data at Baseball Savant, Escobar’s average exit velocity in June is 82.3 mph”
I don’t agree. Look at
http://kingsofkauffman.com/2017/04/27/kc-royals-alcides-escobar-hitting-flyballs/