It was a carbon copy of the previous evening, except the opposite. And, oh yeah, the ending? That was kind of the same. On Tuesday, the Yankees jumped out to a 4-0 lead. On Wednesday, it was the Royals with the early 4-0 lead. And on Wednesday, like Tuesday, the team down in the run column used the remaining innings as an opportunity to chip away.

It adds up to a second consecutive loss. This is a pennant race. August was an exceptional month with 20 wins following a less than stellar July with 19 losses. It’s a setback to be sure and especially brutal given the nature of defeats: extra inning losses at home. One after a comeback, the other after squandering a lead.

Starting At The Top

This was not the Ian Kennedy we’re used to seeing. Entering the game, he owned a 9.0 SO/9 but could manage just a single whiff in his six-plus innings of work. Yes, the home run happened, but it was his first bomb since August 15 and just his third in the month of August. The difference between the three was the one hit on Wednesday was his lone home run allowed with a runner on base this month. (This is probably only interesting to me, but 11 of his last 13 home runs have been solo shots. Two – including Wednesday’s – have come with one runner on base.)

To be fair, Kennedy was starting to get gassed when he returned to the mound for the sixth. There’s a noticeable difference in his velocity from the fifth inning onward. When looking at the chart below from Brooks Baseball, take note of his 71st pitch as the line of demarkation. 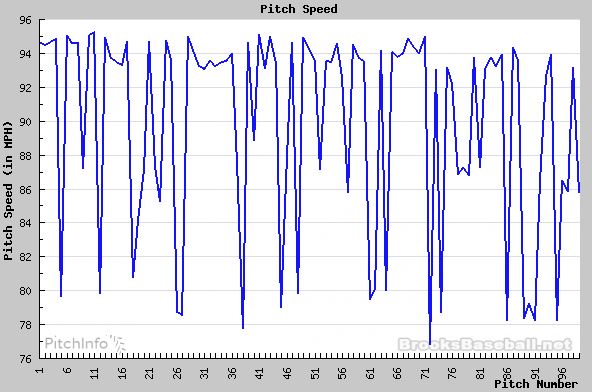 By my count, he threw 13 fastballs in the sixth and seventh innings and only once did he break 94 mph according to the PitchF/X data. It’s interesting that we’re talking about a single mph off his fastball, but that’s going to matter to major league hitters, I suppose. The pitch Kennedy threw to Starlin Castro that resulted in the two-run bomb was a 92.5 mph two seamer. Kennedy’s fastball was a bit flat even before he delivered that pitch (see the lack of whiffs), but one that’s even a tick below average velocity-wise is going to be even flatter.

Perhaps Ned Yost would have liked to have gone to his bullpen a little earlier. By now you know the Yost bullpen modus operandi. He sends a tiring starter back out to open an inning. He’s hopeful said starter can collect three quick outs. It’s all about squeezing every last drop before going to the bullpen. It’s been successful for the most part because the bullpen is nails. On Wednesday it didn’t work so well and it’s easy to see why. The Royals bullpen was gassed. Chris Young couldn’t bring home a win with a seven run lead on Monday, so Kelvin Herrera was summoned for a four out save rendering him unavailable on Tuesday. Peter Moylan had pitched three consecutive days. Joakim Soria threw 54 pitches in two games over the previous three days. The Royals don’t want to pitch Matt Strahm on back to back days and Chien-Ming Wang landed on the DL after pitching two innings the previous night.

Looking for reinforcements, the Royals recalled Scott Alexander and Brooks Pounders. The Royals bullpen is all about depth, but the best depth should always remain untested. When Kennedy was unable to record three outs (or written more appropriately, when he allowed his first baserunner of the inning), Yost motioned to the bullpen. Enter Alexander.  A single and a sac fly for the first two batters and the game is tied.

Of course, most of those arms eventually entered the game. Yost had no choice as the game rolled into extras. They battled, but when you’re forced into going to Chris Young for multiple innings at this point, you’re betting against yourself. I didn’t hear the postgame comments (it was late!) but I would assume Yost was hoping for one more clean inning from Young and was only planning to bring Strahm in if the Yankees threatened. Obviously, that’s exactly what happened. Strahm did well and his velocity looked sharp, but a fly ball ultimately torpedoed the Royals.

Alcides Escobar continued his transformation into a extra base hitting machine. Kendrys Morales hit another home run.  Eric Hosmer hooked one around the fair pole to the opposite field. The rest of the lineup? Not so much. Sure, Salvador Perez had a couple of knocks. It’s just the rest of the order aside from Escobar and Morales contributed just four singles. And when they’re not properly sequenced…

In fact, from the sixth inning on, the Royals didn’t collect a single hit. Not a single base hit.

The Yankee bullpen entered the game in the seventh. Collectively, they threw seven innings of hitless baseball. All the Royals got was three walks and one hit batter.

Again. We’ve discussed this at length this season. The Royals offense has a bad habit of stuffing the bats into the rack at some point during the game. Sometimes, they don’t start going until the seventh or eighth innings. Sometimes, they strike early before retiring for the evening. Other times they shut down for the middle innings. Of course all teams experience scoreless frames, but with this Royals offense it just feels different. Like there’s no threat, or no chance of scoring at all for extended periods.

Really, all we want to know is about how the last two losses will affect the pennant race, specifically the sprint for the Wild Card.

The Astros, Tigers and Indians all swept their opponents to open the week. That’s not good and underscores just how difficult it’s going to be to make up ground in September. The Royals were so far back, with so many teams in front of them they will depend upon the kindness of others to keep pace. As it stands now, the Royals are three back in the hunt for the second Wild Card, with Detroit now in a tie with the fading Orioles for that spot. The Yankees pulled ahead of the Royals with their series win and the Astros are just a game back of the leaders.

The Royals have Thursday off before opening a three game series against the Tigers. Danny Duffy faces Anibal Sanchez in the opener.