The news rolled in throughout the afternoon. The Baltimore Orioles lost. Then the Tigers went down in the ninth. This was a rare opportunity for the Royals to pick up a whole game on two (or more) teams positioned in front of them in the Wild Card race. Before the first pitch was thrown in Minnesota, this game had a must-win vibe. The Royals needed 2016 vintage Danny Duffy.

Duffy struck out 10. He walked none. His change was sharp. His curve was a thing of beauty. He commanded the zone and overmatched Twins hitters. If the Tampa start was the Duffy Gold Standard, the Wednesday start took home the silver.

Duffy got 24 swinging strikes. Thirteen alone on his curve, another six with his change. Eight of his strikeouts were on his curve. The other two came via the change-up. These pitches were simply awesome on Wednesday. From Baseball Savant, here are the location of his strikeout pitches: 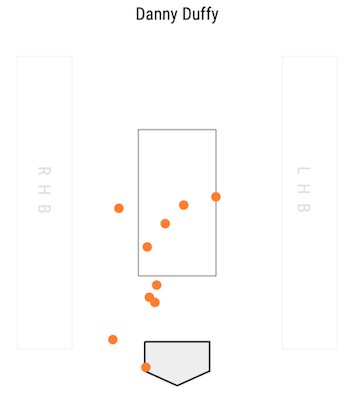 Duffy had the Twins swinging out of their shoes. Through six innings, this was a very promising game for the Royals.

We know that Ned Yost doesn’t really like to think so much about his bullpen and how he deploys his arms. He has a seventh inning guy, an eighth inning guy and his closer. At one time, he even had a sixth inning guy. This is strict and constraining and when it doesn’t work, it’s frustrating. However, Yost isn’t really that different from your average major league manager. Roles matter and managers are loathe to make a change.

It was the 11th time in 62 appearances that Soria has entered the game with a lead or a tie and left with the Royals down or tied. This is a bad track record. Yet, Yost still trusts Soria for some reason. Of those 62 appearances, 30 of them have come in high leverage situations. Only Kelvin Herrera has appeared in more with 36.

This, roles be damned, has to stop.

Yost has to stop throwing Soria in these situations. This is not the same pitcher who once closed games for the Royals. With September call-ups and a stocked bullpen, it’s time to mix and match. Play the platoon percentages. Keep the leash short. Anything. Anything but the Soria status quo.

After Soria set the inning on fire, Yost went to Matt Strahm to try to put it out. Strahm has been very good coming out of the bullpen, but hadn’t thrown for several days with a “slight” forearm strain. I’m not sure why he wasn’t used at the top of the frame. Maybe Yost was saving him for a fireman situation, the spot that would have been filled by Luke Hochevar. Ugh. Honestly, I was surprised that Strahm was back in a game in such a high leverage situation. By that point, Yost had no choice.

Whatever the reasoning, the bullpen has been compromised.

How about a pair of Play(s) Of The Game? In the fourth, Kendrys Morales clubbed a single that drove home the tying run, knotting the game at one. Then, in the sixth, after the Twins had cut the Royals lead to one, Morales provided a little cushion with an absolute bomb off the facade in right-center. A fastball on the outer half that gave Morales the opportunity to extend. 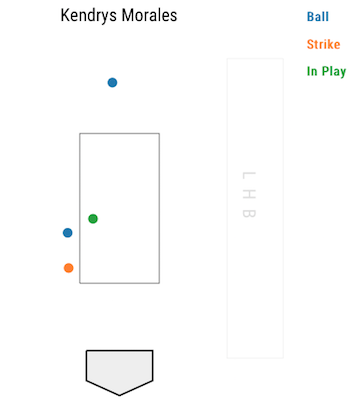 And that sound. Ohhhh, that sound of the ball colliding with the barrel. It’s that exact moment when you know destruction has occurred.

Speaking of destruction, both hits were worth 12 percent in the Royals Win Expectancy.

The overall WPA Play of the Game would be the Sano double off Soria. Too soon.

Kelvin Herrera hung an offspeed pitch to Byron Buxton to give the Twins an insurance run. The Royals plated a run in the ninth to cut the lead to one. The extra run loomed large. A brutal loss.

This feels a bit cruel. I’m barely buckled in to the Royalcoaster. My thoughts on a third consecutive year of October baseball changes hourly. But as mentioned at the top, Detroit and Baltimore both lost. So did Houston. This was a big night for the Royals. They came up short.

There is no way to sugarcoat this. This was a massive missed opportunity.

The Royals are off Thursday before they travel to Chicago to try to get back on track with a three game set with the White Sox.