It’s a grim time to be a Royals fan.

This weekend, we passed the quarter point in the season. You can strap the cliche of “it’s still early” to the bat rack and set it on fire. All these games to this point count. And the results are enough to send you into a spiral of baseball depression.

With 18 wins in 43 games, the Royals winning percentage stands at .419. It’s true they are only 5.5 games out in the wretchedly weak AL Central, and it’s true that’s been the fixation here as the season has crashed out of the gates. The thinking has been the record isn’t of utmost importance. Rather, the distance from the leaders is what matters. That argument can still be made, but that only serves to drink from the well of delusion.

This is not a good baseball team.

Through the first quarter of the season, the Royals have the worst record in the American League. They have played 18 contests against division rivals. They have won four. Frankly, it’s a minor miracle they aren’t further back. The Twins are in first place because they kick the Royals collective ass on the regular. The Royals rank last in the AL in batting average, on base percentage and slugging. Oh, they are also last in the league in runs.

Of course, we hear the refrain of “Don’t give up!” The Royals play their best when their backs are against the wall. They love to prove the doubters wrong and know how to pick themselves up off the infield and come back. They are winners. And so on, and so on.

The 2017 Royals are a different bunch. Sure, some of the names are the same, the names and numbers on the backs of jerseys are familiar. However, don’t be fooled. This team is very different from the pennant winners of a couple of years ago.

After the plane went wheels up in Minneapolis – destination the Bronx – the Royals announced they would option Raul Mondesi back to the minors and keep Miguel Almonte. In a flurry of roster moves between games of the doubleheader, Almonte was recalled as the 26th man, the extra player teams receive when playing two. Mondesi was recalled when Alex Gordon left the team between games for paternity leave. At the time, it was expected that Mondesi would travel with the team to New York, while Almonte would head back to Northwest Arkansas.

Well, Mondesi was Mondesi. At least the Mondesi we’ve seen in his brief tenure in Kansas City. He’s been hitting well in Triple-A, posting .324/.383/.554 – and has hit well in Omaha before – but his brief taste of Pacific League success has not translated to the majors. At least not yet. In Sunday’s second game Mondesi grounded into a double play and was twice called out on strikes.

Mondesi’s strikeout in the fourth wasn’t particularly notable. Down in the count 1-2, he got a 95 mph heater on the outer edge and couldn’t pull the trigger. It happens. Besides, it was a good pitch. The whiff in the seventh was not a good moment. Mondesi swung at two pitches out of the zone and stared at a slider that was almost middle-middle. His strikeouts are presented below. The fourth inning on the left. The seventh is on the right. 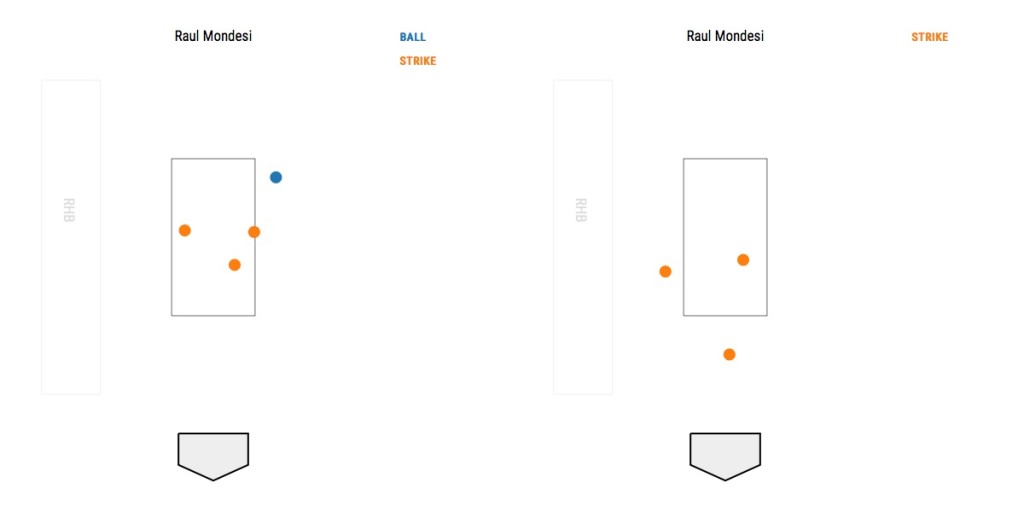 Mondesi is becoming a lightening rod for organizational criticism, which he doesn’t deserve. Although there seems to be a method to the Royals roster math this time around, the young middle infielder is stuck in a situation that is less than ideal.

So, about the Royals current roster… With Almonte remaining with the team, they head into this week with 14 pitchers which means a nine-man bullpen. Nine relievers! It wasn’t that long ago that it was considered roster malpractice to employ seven relievers. And now here the Royals are with nine. This is even after they DFA’d Al Alburquerque to make room for Jake Junis to start the first game of the doubleheader. Alburquerque was never meant to be a long-timer in Kansas City. He was here to provide some innings and was always on the shortlist to be on the way out if the Royals had a need for a roster spot. Of course, it didn’t help his cause that he couldn’t throw a strike in putting the winning run on base in Friday’s disaster. So if you’re keeping transaction score at home, it was Alburquerque out for Junis who was subsequently shipped out when Kennedy was activated off the DL. So many moves and they’re still stocked with 14 pitchers. The counter to a bloated pitching staff is the Royals are now left with two bats on the bench. Drew Butera, who as you know is the backup catcher, and Cheslor Cuthbert.

The Royals are obviously trying to deal with their rotation and a bullpen that isn’t anywhere close to the lockdown unit we’ve become accustomed to the last couple of years. Nate Karns is dealing with some tightness and fluid buildup on his elbow. His normal turn in the rotation would be Thursday, but it’s listed as of this writing as TBA. The Royals pulled an ineffective and rusty Ian Kennedy after just two innings and 54 pitches, thinking ahead to Thursday. Maybe he could be pushed forward a day.

Or maybe it could be Almonte. The right-hander has pitched well in Double-A, posting a 1.86 ERA through 29 innings of work. He’s struck out 35 and walked just six. Despite the numbers, that seems doubtful. He’s here for the next few days as an emergency swingman in case the team needs some innings out of the bullpen. There were plenty of roster moves on Sunday, there could be a few more ahead. Maybe Karns moves to the DL. That means Jake Junis who pitched well on Sunday could be recalled and take another turn, but that turn would be on Friday. That’s a scenario that could unfold if Kennedy takes the mound on Thursday.

At any rate, you can see from the last couple of paragraphs there are plenty of unknowns swirling around this rotation. And a nine-man bullpen! The strength of this team through the first quarter of the season is about to be seriously tested.