When the Royals began their series with the Yankees in Kansas City last week, they likely needed to pull an 8-5 record at worst over their next 13 games. So far they’re 2-4, so this trip to New York for a four-game set is nearly a must-sweep if they want to try to climb back into the AL Central race. The Yankees are kind of surprise contenders this year, but when you look up and down their roster, it’s easy to see why. The lineup is incredibly good and incredibly deep. There are questions and concerns about the rotation, but the bullpen is strong, and that’s even without Aroldis Chapman for the time being. This is a really good team. 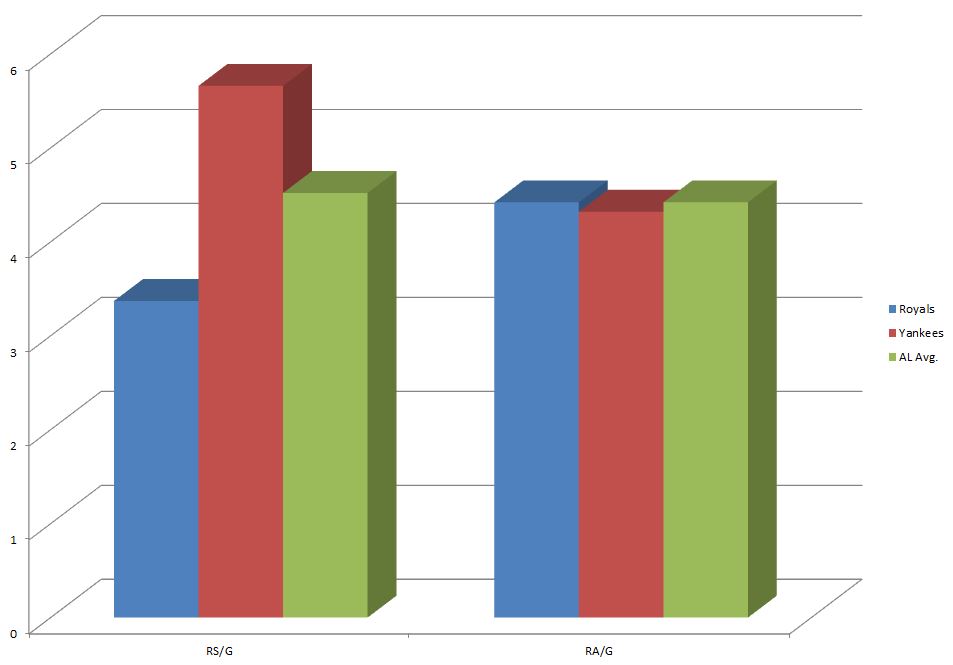 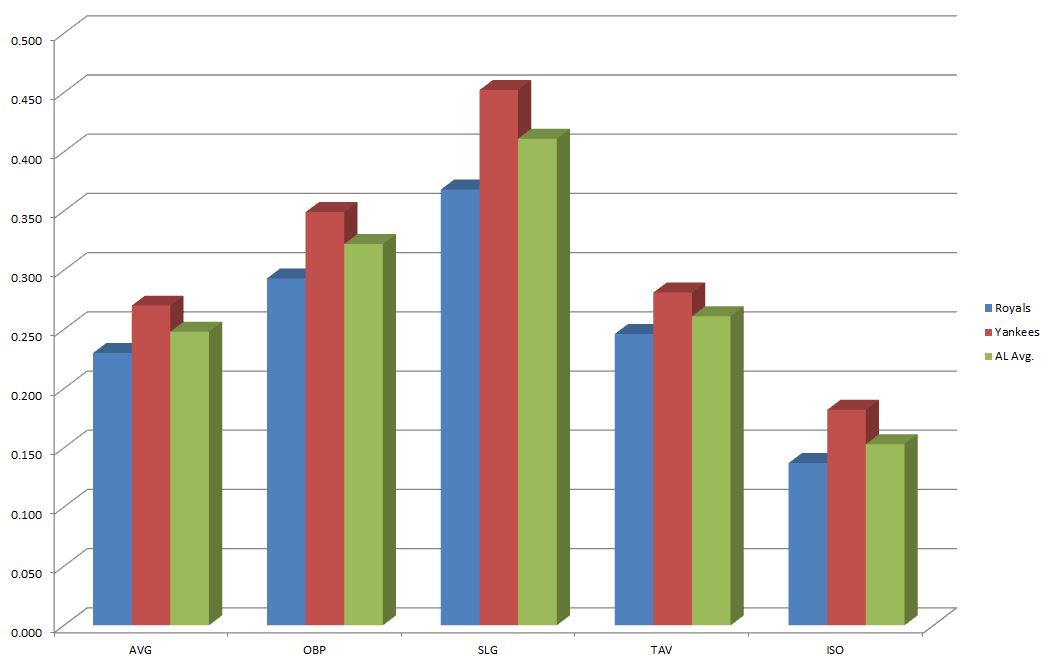 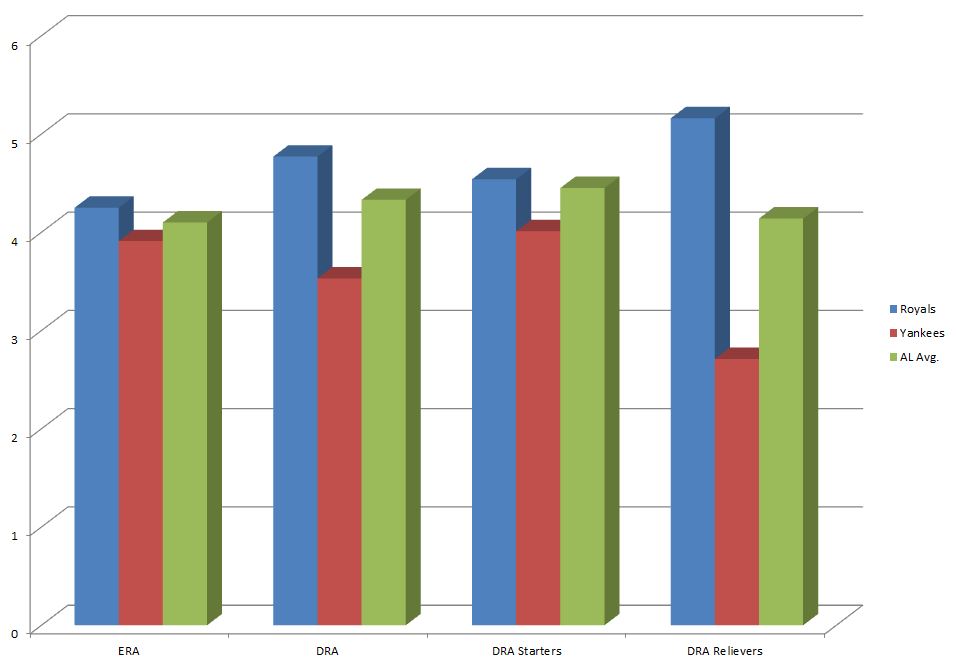 Pineda matched up with the Royals last week and got the win, but he didn’t exactly pitch great. He gave up four runs (three earned) in six innings and only struck out five while walking two, which was tied for his season high. Just to recap from last week, Pineda throws a cutter more than half the time at 94-95 MPH and mixes a slider nearly 40 percent of the time. The rest are changeups, which have been pretty bad for Pineda this year with a .455 average allowed and .727 slugging percentage. One thing is that he’s had some troubles with is the home run ball, and Brandon Moss and Savlador Perez are both seem locked in right now, so hopefully they can take advantage of the small dimensions of Yankee Stadiuml.

Vargas had his first truly bad start of the season against the Yankees, and it happened just the way I expected it would. His changeup wasn’t working and the rest of his stuff wasn’t good enough to make up for it. The Yankees right-handed power is concerning against him, so if the changeup isn’t working again, it could be big trouble. I honestly believe this is why the Royals are working with 14 pitchers for the time being. Chris Young and Mike Minor are likely not available, so Miguel Almonte is needed, you know, just in case.

Montgomery is the other rematch for the Royals in this series. It’s surprising they were able to hit him because they struggle with lefties and with pitchers they haven’t seen much. His five runs allowed were a career high for him, but he did only give up four hits with the big blow being a home run off the bat of Mike Moustakas. Montgomery mixes five pitches: a fastball at 92-93 MPH, a sinker at a similar velocity, a changeup, a curve and a slider. The fastball has been effective, while the changeup and slider have been outstanding. The curve and sinker, though, have been what hitters have gotten the job done against him. He doesn’t have the home run issues Pineda does, but he also doesn’t have especially great stuff, so he could get touched up. Montgomery has had a reverse platoon split this season with a .248/.329/.349 line allowed against righties and a .250/.348/.600 line against lefties.

Duffy hadn’t looked especially good in his last few starts before facing the Yankees last week, but he built on his last few innings against the Orioles in his previous start and ended up striking out 10 over seven shutout innings that the Royals desperately needed. It’s tough to shut down a team twice in a week, and Yankee Stadium is difficult on all pitchers, but I’m hopeful Duffy can continue what he’s shown over his last 10 innings or so.

The Royals get their first look at Severino this season, and he’s been much better than he was last season. His ERA approached 6.00 and he was shifted to the bullpen, but back in the rotation this year, he’s been outstanding. His strikeout rate is one of the best in baseball and he’s continued to show good control. The only thing that isn’t top level for Severino this year is the fact that he isn’t consistently getting deep into games. He has gone seven or more innings in half his starts, but he hasn’t gotten more than 5.2 in his other four.

Like Pineda, Severino doesn’t throw many pitches, but he throws them well. He relies heavily on a fastball at 97-98 MPH. His slider is the money pitch with two strikes, as he has recorded about 70 percent of his strikeouts with it. He also throws a changeup, and while it’s been excellent this season, he still hardly uses it. The fastball is worth noting, as he’s allowed a .291 average on it with a .481 slugging percentage. Those numbers aren’t elite or anything, but they’re good enough to knock him out of games. A couple things stand out in his splits. For one, he’s had trouble at home. His strikeouts and walks are about the same home and road, but he’s posted a 5.09 ERA at home compared to 2.25 on the road. A lot of it is just noise, but some of it is that the home run ball has been a problem for him in his four home starts. My one piece of advice for the Royals is to work the count to get him out of the game. Part of the reason for that, is that he’s allowed a .150/.150/.300 line on the first pitch this season, so that’s pretty bad.

Hammel in New York seems like a poor fit and a recipe for some disaster. He was supposed to go in the Minnesota series but had his start moved back a few days with the rainout and the uncertainty over Nate Karns. In his last start, he gave up five runs over six innings against the Yankees and it was an improvement over his previous start. His strikeouts had been ticking up, but then in his last start he got only three swinging strikes and didn’t record a single strikeout. He needs a good outing here, but with the rotation’s health in question now, he’s got some time.

It’s been a bad season for Tanaka. He had a 3.12 ERA in 75 starts in his first three seasons in the big leagues, but you can see where his numbers have gone this year. What’s weird is that it looked like he was turning things around when he gave up one run over 16 innings in his last two starts of April, but he’s had a brutal May. In 18 innings over four starts, he’s given up 22 runs on 34 hits with 10 home runs allowed. Add in a hit by pitch and he’s allowed 40 base runners in those 18 innings. It’s been bad.

It’s not a velocity issue. That’s remained consistent. He relies mostly on a sinker, slider and splitter and he mixes in a cutter four-seam fastball and curve. So far this year, nothing has been hit softly. The splitter and slider have been the best in terms of suppressing hits. He’s allowed an .861 SLG on sinkers and a .455 average with a .727 slugging percentage on sinkers. But like I said, not much has gone right for him. He’s allowed a .519/.552/1.148 line on the first pitch, which is beyond terrible. When he’s behind in the count, opponents hit .358/.500/.830 against him, which is truly awful. He’s allowed a .957 OPS the first time through, 1.014 the second time, .857 the third time and .952 the fourth time. The moral of this story is that there’s a lot of opportunity to hit Tanaka.

Miguel Almonte will make his first big league start for the Royals in this one, but not his big league debut. He made nine appearances for the 2015 Royals (earned a ring!) and went 0-2 with a 6.23 ERA over 8.2 innings. The home run ball bit him in those appearances as he allowed four, so that’s not great. The prospect shine is basically completely gone from Almonte after he had to be dropped a level to AA, but he fared quite well there this year as can be seen from his statistics. Nobody doubts the talent, so maybe he just needed a little more time. Still, this is a tough lineup to find out against, so hopefully he can give the Royals four or five quality innings.

I really don’t think I like this series for the Royals. I do like the way the bats are hitting the ball out of the park, which could be good in Yankee Stadium, but I don’t like the way they’re pitching right now. I think they find a way to split the series, but the wins they get will be close, so they’ll need things to go right to make sure they actually do get them.

Tags: Danny Duffy, Jason Hammel, Jason Vargas, Nate Karns |
David Lesky
Follow @dblesky
I've been a Royals fan since the day I was born, and have had the opportunity to write about the Royals for nearly a decade now. The winning was better than the losing, but the losing is kind of familiar at least.
read more from David Lesky