As promised, we have the final 20 rounds of the 2017 MLB Draft analysis for the Royals right here for your reading pleasure.

This prep player impressed in the Area Code games last year, tying Garrett Mitchell for the most hits in the event, proving that despite his relatively unknown status, he has the ability to hit upper-level competition. From the sounds of it, he has quite a bit of interest in starting his pro career and the Royals chances of adding him to the organization are better than average.

Perfect Game – An above-average athlete with good raw skills in the outfield; some scouts see Smith as a potential plus defender in the outfield; though it is possible that as he continues to fill out and mature that he moves to a corner outfield spot. His offensive game is a bit unrefined right now, as is the case with the vast majority of prep bats, but Smith shows the bat speed, feel for the barrel, and power potential necessary to entice scouts this spring.

Analysis – A strong add to the organization that has shown he can hit upper-level high school competition. 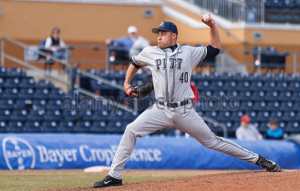 A thick built Mitchell was pushed into a Friday night role for the Panthers after a pair of injuries this season. The lefty, who had been unspectacular in his college career to that point, held his own thanks to a new pitch that was offered up to him.

The pitch that the Panthers staff introduced to Mitchell was a cutter to go alongside his other three offerings. That cutter works in the 83-86 mph range according to Coach Oakes and gives him a difference-making pitch as he’s able to work it in on right-handed hitters. Combining that pitch with his 88-91 four-seam fastball that tops out at 94 mph in short bursts, gives him enough stuff to compete.

Coach Oakes believes that Mitchell could drop his arm angle from his over the top delivery to give him more deception, liking what he saw from his sidearm view that he offered from previous to this year. The fastball/cutter combo is the prime two pitches for the lefty but he does also offer up a low-70s curveball and a change in the 77-79 mph range.

Analysis - A lefty organizational reliever with the body to offer up more innings.

This shortstop from the junior college ranks likely profiles as a utility type in the pro game, where his hands and strong arm work better at second and third base than the range does at shortstop. Despite good bat to ball skills, he has a limited power profile leaving him as a likely minor league utility option.

A mid-week starter and reliever for Texas, Mayes had a rough season after an impressive Summer League season in the California League. With a starting repertoire of fastball, curveball, and changeup, Mayes has the stuff to get outs when he’s controlling it, but that’s something he struggling mightily at Texas.

Perfect Game – The stuff is very good but not over the top with a slightly downhill fastball at 90-93 mph and a 1-to-7 breaking ball in the upper-70s.  Mayes’ aggressive mentality is his separator and a strikeout-to-walk ratio of 42-to-6 this summer clearly indicates that he is back to that mindset.  Mayes will be a critical piece of what should be an excellent Texas pitching staff in 2017.

Analysis – Solid repertoire that you hope you can refine and give you solid organizational innings.

James is an NAIA small college product with speed in center and on the bases as his calling card. He stole 46 bases in 54 attempts this past season while hitting .276 for his school.

“Just continue to do what I do,” James said. “Run fast, hit the ball on the ground, get on base and steal some bags. Just because you got drafted doesn’t mean you don’t have to work. Still have to work. The same mentality I did in college: Play hard, play fast.” Via MS News Now

Analysis – A little speedster with a little pop in the bat.

Despite his average stuff, Suchey was the most dependable pitcher on the team’s staff from the bullpen. The righty worked a Bama high 73.2 innings this season, despite the majority of his work coming from the bullpen.

Primarily a two-pitch pitcher, Suchey works 88-90 mph with his fastball while pairing it with his slider. That breaking pitch is the money pitch for him, accounting for the majority of his 70 strikeouts in 73 innings.

Hutchins is a catch and throw catcher who hasn’t hit much in the college ranks.

Fischer is a big time arm from a tall, thin frame with upside. He works his fastball up to 94 mph with a severe downhill plane. The arm speed is fast, but the long arm motion leads to extremely erratic control. The breaking ball he features in the high 70s to low 80s profiles as a plus pitch down the line.

Texags.com – “Tylor has that quick of an arm and he will throw the ball hard. He is going to spin the ball well. He is a 6.6-runner. He plays centerfield for his high school team and is an incredible athlete. I think the opportunity to work with Coach McMillan (strength coach) and Coach Childress means the sky is the limit once he gets here and once he gets into a consistent routine and repeats his delivery on a day-in and day-out basis. He has really special ability.”

Analysis – The upside is extremely intriguing, but it seems like a longshot that he’ll end up in the organization instead of in College Station.

The athletic and big outfielder has shown an advanced approach in last two seasons at Texas, carrying a near .400 on-base percentage during both seasons. Unfortunately, the power hasn’t come through as of yet for the big bodied utility ballplayer, who can play both infield and outfield.

Baseball America – Jones is an average runner who can play all three outfield spots as well as the infield corners. He has at least average arm strength and raw power, though, with his long levers and fringy feel for hitting, he doesn’t get to it consistently.

Analysis – Some positive tools to build from with a smart approach.

A control type lefty, Bainbridge isn’t going to overpower hitters with his high-80s fastball, but he’ll look to outsmart them. The three-pitch mix of the fastball, average changeup and an average breaking ball is enough to get over on young hitters.

This lefty will have to tick up at least one pitch to survive against more talented hitters than he faced in his conference.

Analysis – Intelligent lefty with a three pitch average mix could eat up some minor league innings at lower levels.

A regular on the showcase circuit, Vought is a big-bodied catcher who should only add strength onto his already good size frame. Also a pitcher in high school, Vought has the arm strength to play the catcher position and once the strength is added, he could be a formidable power option with average abilities behind the dish.

Prep Baseball Report – Right-handed hitter uses a short, leg-hand stride from a square stance to initiate his swing.  Has shown power to all fields with a short stroke and the ability to hit for average.  Above average size for a catcher with solid arm strength.  Has displayed consistent pop times in the 1.95-2.05 range.

Analysis – He likely makes his way to Maryland.

After a stellar season last year that led Coastal Carolina to a surprising run through the college baseball world, Beckwith struggled in 2017.

The righty gets by with average stuff thanks to movement and varied arm angles. From upper angles, Beckwith’s fastball is in the 88 mph range, but drops as his angle goes to side arm to below side angle. As the angle drops the groundballs rise for this future reliever.

Along with the fastball, Beckwith features multiple other offerings, working a curveball and slider both in the low 70s with differing movement dependent on the angle.

The control profile combined with the slot and movement makes him a difficult matchup, especially for right-handed hitters.

Analysis – A fun pick that could turn into a future ROOGY.

Nearly 50/50 arm motion that’s a long motion while throwing in the low 90’s with a hard breaking ball. In his final season at Indiana State K’d over a hitter per inning while allowing just a .222 average against. That arm motion could be very difficult for right-handed hitters to pickup.

Klein played center field at Standford, but failed to hit much until this past season. That followed a summer in the Cape in which he hit sub .200. As a center fielder, he showed solid athleticism and has been clocked at 94 mph from the outfield in high school and upper 80s off the mound in high school.

Analysis – Betting on the strong arm and athleticism to come through. Pure athleticism player here.

A corner outfielder, Rohlman showed decent hitting ability with hard contact at Clemson and solid on-base skills. Those on-base skills included running into more than a few pitches (22 HBP in 2 years) to get on in any way he can for his team.

To this point, he hasn’t focused on hitting the ball out of the park, but to improve his chances at a career going forward that will have to become a larger part of his game.

Analysis – He has a solid approach, but will need the power to come forward to get to the bigs.

Cox didn’t hit much at Arlington besides a BABIP-built junior year. Catch and throw org type.

Hauver is a talented high school middle infielder who the Royals took here with a very very slim chance to bring into the fold with his Arizona State commitment. The swing and approach are advanced for a high school hitter which shouldn’t shock anyone considering his high profile on the showcase circuit. He likely profiles as a second baseman with pop in the future.

Analysis – It’s unlikely that he signs.

His father is the Royals minor league hitting coordinator.

Analysis – A late round relative pick with above average speed as the major tool.

A dual sport athlete who played quarterback in high school, Mitchell shows good athleticism for a catcher with some decent power projection for the future. He shows good movement behind the plate with an average arm, and has registered pop times in the sub 1.9 range.

Analysis – Likely sticks with his Oklahoma commitment.
Editor’s Note: According to Ross Martin, publisher and managing editor of the Platte County Citizen, Mitchell is indeed sticking with his commitment to Oklahoma.

Another relative pick here, Ramos showed hard contact during the PG Puerto Rican showcases despite a small frame and weight that suggest slap hitter. Has a solid average arm in the infield but below average speed.

Analysis – An organizational infielder who might have to move to second base.