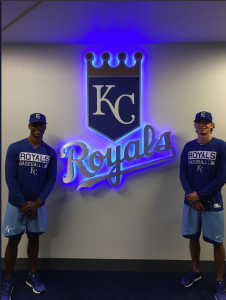 The 2017 draft class is nearly complete with Monday, July 3rd being the final day for any drafted players to sign. Recently, the Royals finalized deals for prep pitchers Marlin Willis Jr. and Tylor Fischer.

The signing of Fischer was a surprising one to me as I figured his Texas A&M commitment was strong for the prospect that was ranked #181 overall by Perfect Game. Both players are strong additions to the farm system that has added some young prep arms the last couple of drafts in the late rounds in these two and Malcolm Van Buren from the 2016 draft.

Little second baseman Esteury Ruiz is bringing his big bat to the AZL this year and is off to an outstanding start. Last year, Ruiz put up the best season in the DSL by a Royals hitter since Jorge Bonifacio played there in 2010, which I’ve written before. It’s just six games, but Ruiz is proving he might not be long for Arizona, hitting a pair of home runs with three doubles and a triple in his first five games. One person in the business comped him to Alfonso Soriano with his quick twitch athleticism and ridiculous power from a small 6’0 160 lbs frame.
@billazbbphotog: Lots of good prospects in the AZL this year, but keep an eye on #Royals 2B Esteury Ruiz. He can hit and has impressive power for his size.
His impact bat could actually be worthy of the Royals Top 10-15 prospects right now even though I didn’t rank him in my latest rankings despite placing him at 27 prior to the season. Sometimes being conservative with young guys can prove to be a mistake.

The Royals and MLB announced that Foster Griffin would be their representative in the 2017 Futures Game. As a native of Orlando, Griffin will likely have plenty of family and friends in attendance at the game taking place in Miami. More amazing than being the representative this season is Griffin’s amazing turnaround. After struggling in ’15 and ’16 with a combined 1.59 WHIP and a 5.43 ERA, the lefty has dominated from start one this season. Showing improved command with his 89-92 mph fastball, manipulation of shape and command of his curveball and an improved changeup Griffin has already hit the 100 inning mark in 17 starts with a 2.52 ERA and a 1.11 WHIP while striking out over a hitter per inning.
The pitch combination that he showed on Saturday gave Griffin the appearance of a #3 starter instead of the backend profile I’ve given him. The lefty commanded his fastball, manipulated the curve into a big looping breaking ball or into more of a tighter late breaking slurve.

I received quite a few comments on Twitter the other day when I stated there isn’t a prospect in the system that I wouldn’t part with, if it meant a chance at the playoffs in ’17. There are obvious caveats to this in that I wouldn’t trade Raul Mondesi for a rental 5th starter, but for the right starting pitcher, he is an obvious tradeable piece. The facts are that while I like this system more and more every day, you just don’t know when you can place a flag in the outfield and players like Mike Moustakas, Eric Hosmer, Salvador Perez and Danny Duffy have changed this organization in unmeasurable ways since joining it in 2007 and deserve every opportunity to add to their Royals legacy.
For more minor league coverage follow me on Twitter @ClintScoles.
Tags: Danny Duffy, Eric Hosmer, Esteury Ruiz, Kansas City Royals, Marlin Willis Jr., Tylor Fischer |
Clint Scoles
Follow @@ClintScoles
read more from Clint Scoles