The Royals made a pretty fascinating trade yesterday, bringing three pitchers into the fold for their stretch run to the playoffs. David Lesky has that full trade breakdown for you here, so make sure you familiarize yourselves with all the players involved.

While Trevor Cahill is likely the biggest chip coming to Kansas City, there was another name I found even more intriguing. Brandon Maurer has long had electric stuff. His fastball sat in the mid-90s even when he was a starting pitcher, and he can now top 100 with it out of the bullpen. Along with that, his slider and changeup can miss quite a few bats sitting in the mid 80s.

However, like so many pitchers before him, Maurer hasn’t really had the results to match the stuff. Since coming over to San Diego before the 2015 season, Maurer has a 4.33 ERA, despite maintaining very good strikeout, walk, and hits allowed numbers. His WHIP of 1.181 in that time definitely appears to be too low to go along with the higher ERA, but with 160 innings of work, this can’t really be ignored. Ultimately, it comes down to his performance with men on base.

First, let’s look at those numbers against batters from each side of the plate over the last three seasons.

In the interest of full disclosure, the number of at-bats for each split ranged from 110 (vs. LHB with men on base) up to 188 (vs. LHB with bases empty).

While the numbers against lefties with men on base aren’t exactly dominant, they clearly aren’t the main cause of Maurer’s struggles when opponents reach base.

I certainly don’t want to pretend that I have any kind of real expertise when it comes to major-league pitching, but on the surface level, it seems that Maurer’s problems are somewhat straightforward. Just take a look at this heatmap of pitches to righties with the bases empty: 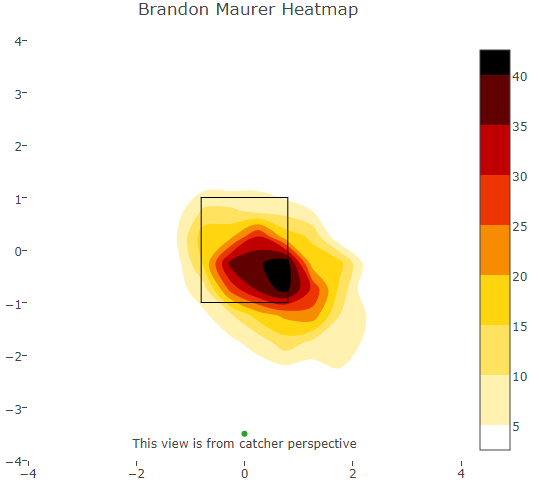 And now compare that to the location of pitches thrown to righties with men on base: 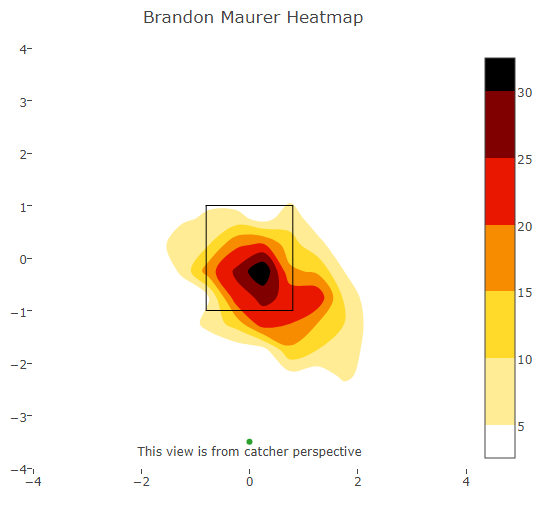 That cluster of pitches in the middle of the zone? Yeah, those are bad. Maurer has simply left too many pitches in the heart of the plate for batters to feast on, a problem that is amplified with men on the basepaths.

Perhaps connected to the poor location is the pitch selection. Since 2015, with the bases empty, Maurer throws his fastball roughly 57 percent of the time and his slider about 37 percent of the time. With men on base, that ratio goes to 46 percent fastball and 46 percent slider. If Maurer were locating his slider on the outside corner more often, this likely wouldn’t be as much of a problem, but it appears that he’s not commanding this pitch as well, leaving a few over the plate, which makes it all the more interesting that he’s still throwing so many sliders in those situations. This lack of command has also resulted in a walk rate of 10.4 percent with men on base, well above his 4.4 percent rate with the bases empty.

One other potential factor is Maurer’s delivery. Unlike many relievers, he still employs the full windup with the bases empty, only using the stretch once men reach. It’s possible that his delivery from the stretch simply needs a mechanical tweak so everything is on time. After a brief video review nothing stood out to me, but there’s a reason I’m typing these words and not wearing Dave Eiland’s uniform in the Royals clubhouse. If there is a mechanical flaw, I’m confident Eiland can find it and fix it.

Maurer won’t be a free agent until 2020, which means the addition of his powerful right arm to the Royals bullpen could be quite valuable. If the Royals aren’t contenders in the next couple of seasons, an effective Maurer becomes a terrific trade chip. For the time being, though, the Royals are contenders. They’re in a great position to roar into the playoffs, and if Maurer can turn things around, he can become a vital cog in what could be another dominant Royals bullpen.