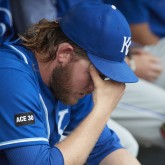 We’ve reached our first milestone of the offseason. MLB Trade Rumors released their arbitration estimates on Tuesday. With the first year of a rebuild in the books, and contention seemingly far in the future, it’s not a surprise the Royals list is thin and relatively uninspiring. All told, they have six arbitration eligible players on […] 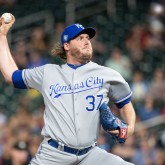 I apologize if this is the first you’ve heard of this issue, but the Royals bullpen is not what you’d call good. It probably actually isn’t even as bad as you’d expect. If I asked 10 people to guess what the collective ERA of the bullpen was, I’m guessing they’d be about a run higher […]

Christ. I had some real nice stuff here about the Royals making some progress and starting the second half with some fire and vigor and the appearance that they’d like to be a semi-respectable baseball team again and for eight innings, that looked to be the case. Eleven pitches into Brandon Maurer’s relief effort and […] 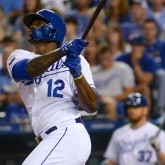 Oh boy, you probably recently found yourself saying about the Royals prospects for an impending firesale and the bountiful harvest of prospects sure to be heading their way. I can’t wait to see how the future is impacted by these necessary if unfortunate trades we’ll see soon, and hopefully what a wonderful impact they’ll have […] 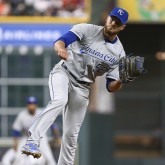 Yeah I know that technically it says in the box score that Brandon Maurer blew the save but hear me out. There’s a little more to it than that. The Royals lost, they do that a lot. Tonight they lost in a way that was slightly different given how 2018 has gone—by planting hope against […] 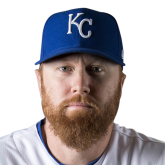 Editor’s note: This article was begun on a Friday morning before we got the wonderful news that Brandon Maurer had been banished to Omaha for Crimes Against Baseball in what, if there’s a merciful baseball God, will be a lengthy sentence. The slant of the article was initially supposed to be to trash both he […] 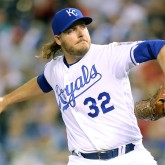 For just a second, I’m gonna say some nice things about Jason Hammel and Ian Kennedy. In back-to-back days, Kennedy and Hammel pitched a combined 12 innings. They allowed seven combined hits and no runs to the Cleveland Indians, a very good team with the deepest lineup the other side of Houston. That is not […] 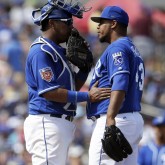 It seems especially futile to project any kind of Opening Day bullpen, even at this point. Not so much because it doesn’t matter. More because it seems like this is the Royals version of a revolving door. The group they break camp with for the opener on Thursday will most assuredly look different by the […]

It doesn’t take a great deal of work to find a reliever in baseball these days who can throw the ball 96 MPH or harder. That doesn’t make those pitchers any less enticing when they come around. And yet, even with that the case, the Royals have a guy who routinely lives in the upper-90s […]

We’re really cooking on the hot stove now with moves for Doug Fister and Yusmeiro Petit in the books and a couple of non-descript relievers getting traded. The big names are already flying off the shelves, and the Royals have done nothing! Well, not nothing. They did bring back Seth Maness on a minor league […]