Editor’s note: This article was begun on a Friday morning before we got the wonderful news that Brandon Maurer had been banished to Omaha for Crimes Against Baseball in what, if there’s a merciful baseball God, will be a lengthy sentence. The slant of the article was initially supposed to be to trash both he and Blaine Boyer for being very bad at the throwing of baseball’s, but with Maurer now relegated to Triple-A, it’s hardly fair to do that to him, which almost didn’t stop the author because he is a monster. But due to professionalism or the appearance thereof, our heroic (and strikingly handsome) author powered through to give Blaine Boyer the thorough fisking he deserves, with little mention of Maurer outside this paragraph and the next.

Brandon Maurer and Blaine Boyer are is a bad pitchers and I’m really hopeful that they’ve he’s been DFA’d (or, frankly, outright cut loose) by the time you read this. But in the event that they haven’t he hasn’t been (Note: One down, one to go!), I want to illustrate for you, dear reader, how gut-punchingly bad they have he has been, both this season and through the larger arc of their his careers. 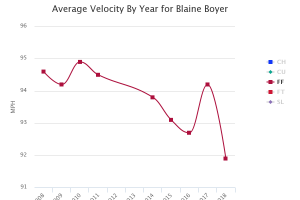 Boyer’s fastball is a tick below 92 mph, averaging 91.8 through the first threeish weeks. Of the 104 MLB relievers with 50 or more fastballs offered to this point in the season, it’s well below the league average (93.3) and 78th overall, ahead of Nick Goody, Dan Jennings, Bobby Poyner and Warren G. Harding, the last of whom was the 29th President of the United States, has been dead for almost 95 years and likely didn’t have a great fastball when he was alive.

Last year, Boyer threw 384 fastballs, averaging 94.2 mph. The year before, 92.8 on 573 pitches. The fastball might be washed, kids. The fastball doesn’t come back for 36-year olds unless MLB decides to suspend PED testing and if that happens, we’ll get my beautiful son Jorge Bonifacio back in the lineup and I won’t care what Blaine Boyer is up to anyway.

Should you (wrongly) think, “Well, Boyer has other offerings, just throw less of the fastball,” I’m here (rightly) to correct you. Boyer’s breaking ball may be one of the most hittable pitches in baseball. Here are the locations for balls in play off Boyer’s breaking offerings this year. They’ve averaged 90.4 exit velocity. Seven have gone for hits—that .500 average is fourth-worst in baseball. 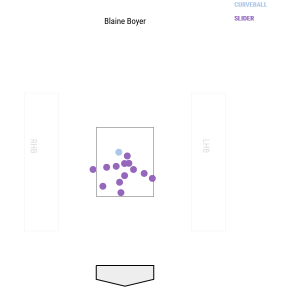 Effective velocity vs. actual velocity? Nearly a mile per hour slower, tied for 159th of 244 pitchers with at least 100 pitches to their credit. And that’s an improvement! Two years ago, the difference was a full mile per hour, in the wrong direction. Bad. This is bad. All of it. Wither Miguel Almonte?

Here is where I’d like to point out that Boyer has been BABIP’d half to death over the last couple of years, from .328 to .376 to an insane .444 this season. BABIP can be a nouveau riche stat depending on how long you’ve been analyzing some analyticals, and can still provide a useful 10,000-foot view of a situation like Boyer’s (because, again, he’s bad), but it doesn’t take much effort to separate fact from fiction. Isolating line drives from other plate results, we find some things.

It’s here that our article takes a turn, because your originally scheduled Brandon Maurer content now has to be replaced by an altogether different question: of the two, who are unquestionably on the shortlist for worst relievers in baseball at present, what was it about Boyer that kept him with the big club while Maurer went down? Other troubles aside, Maurer still throws hard and has some value to recoup should he put together a few weeks—somebody is always gonna take a flier on the guy whose fastball sits 95 mph (see Royals, Kansas City, just last year). Unlike Boyer (9.64 BB/9), Maurer isn’t currently walking a man per inning. Give me the guy who will at least bother to throw strikes.

Conclusion: Brandon Maurer has been trash for all of 2018, but he’s at least been the kind of trash you can trick somebody else into throwing out for you. Blaine Boyer has been more like a bag full of diarrhea-filled baby diapers; that’s gonna be your mess to clean up.

Tags: Blaine Boyer, Brandon Maurer, Kansas City, Royals |
Colby Wilson
Follow @@CWilson225
I watch the box with the moving pictures and write about what I see. I tweet, mostly pictures of my dogs (aww), thoughts about being a new parent (awww!) and things I think about sports and beer and movies. That's @CWilson225 if you're interested.
read more from Colby Wilson