After a week and a half in the Eastern time zone, the Royals return home to face Jarrod Dyson and the Seattle Mariners. The Mariners are right in the thick of the Wild Card race, so even though the Royals are hoping for a division title in 2017, this is a big series to be able to push them down in the standings and hopefully come closer to eliminate one of their competitors for that playoff spot. The Mariners can score some runs with a deep lineup that won’t necessarily wow you with any one player, but can do some damage. Their starting rotation leaves something to be desired, but they have some talent in the bullpen that can help to shorten games quite nicely. 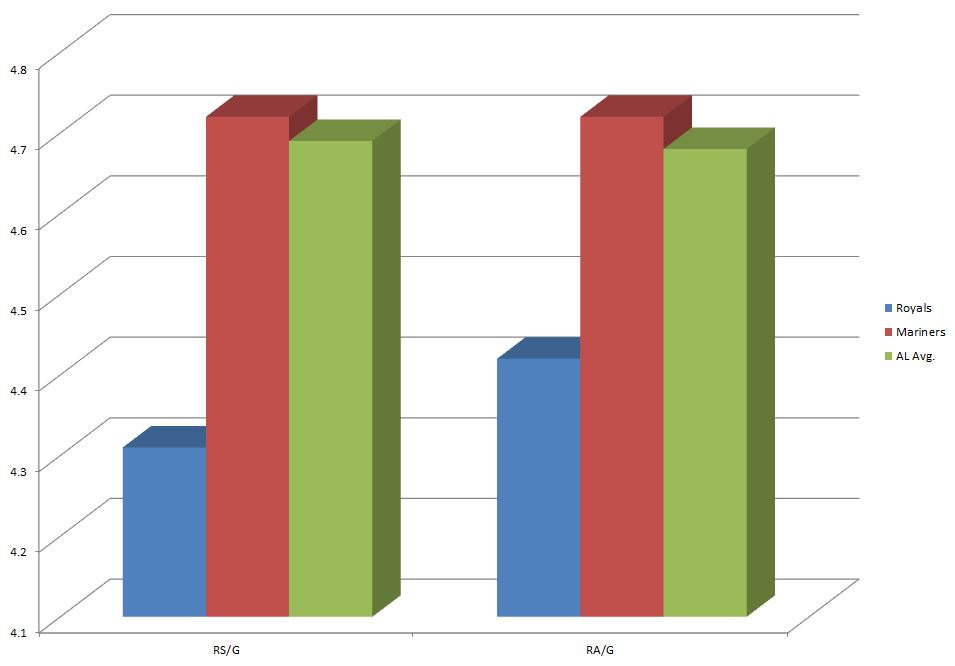 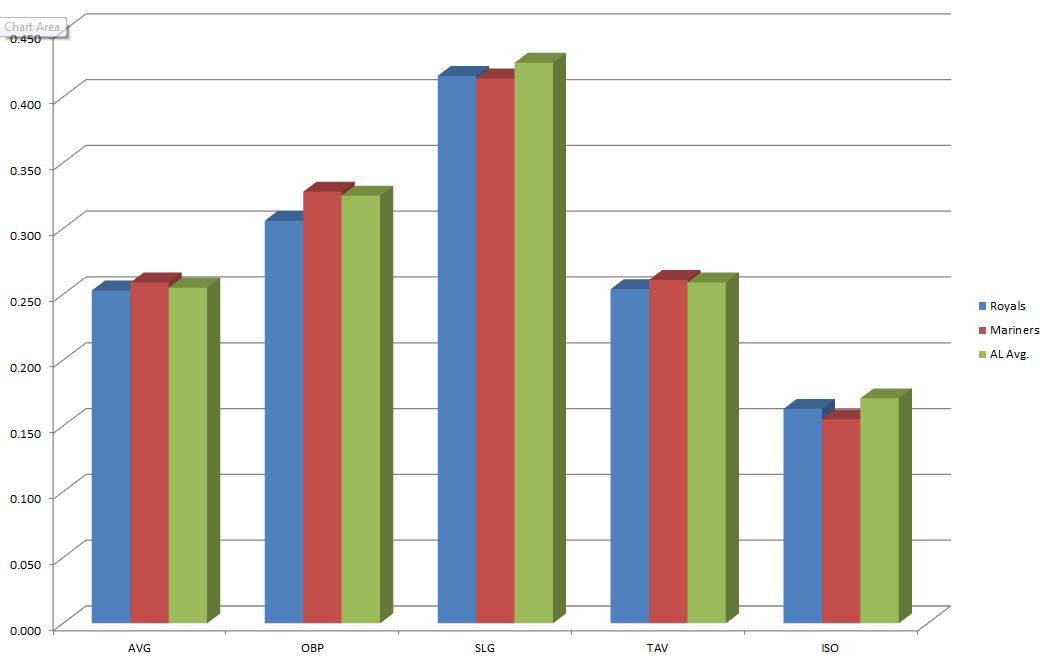 Gallardo is back in the Mariners rotation for some reason. I guess it’s only fair to point out that he has been effective enough in his first two starts back, allowing three runs over five innings (with three home runs) and one run over 5.2 innings his last time out. Still, he had a 6.30 ERA when he was removed from the rotation in June and likely isn’t a different pitcher now than he was then.

Gallardo once had great stuff. He doesn’t anymore. He throws a fastball and sinker at about 92-93 mph with decent movement and complements those with a slider, curve and changeup. The curve has been his most effective pitch, limiting opponents to a .209 average and .372 SLG on it. His sinker has also been solid, so I guess that’s a decent foundation. Gallardo has a reverse split this season, allowing a .299/.367/.495 line to righties compared to .242/.318/.392 to lefties. It would probably be wise to get Bonifacio in the lineup. Additionally, getting to Gallardo early is key. He’s allowed an .888 OPS the first time through the order and a .909 OPS in his first 25 pitches.

Cahill’s first time out as a member of the Royals didn’t go well, but that was a weird game. I think we could all see the stuff he possesses, so if he can get that under control against a far less patient lineup, I think he could have some success. One thing to note is that while pitcher/batter matchups never have enough of a sample size to be relevant, it’s interesting to see that Nelson Cruz has hit .174/.222/.174 against him in 27 career plate appearances.

Paxton is nasty. It’s just about health with him. You can see the numbers above. The guy gets tons of swings and misses. He has control. He limits hits. He doesn’t give up home runs. It’s pretty fun to watch him pitch when he’s not going against your team. One thing worth keeping an eye on is that he’s thrown 11 wild pitches this year, so Royals base runners (assuming there are some) need to be on the lookout for that.

Paxton relies mainly on a big, 96 mph fastball and a curve that eats up basically everyone. He also mixes in a cutter and the occasional changeup. Amazingly enough, this could be a good game for Alcides Escobar, who has hit .368 on fastballs from left-handed pitchers. Now, not many fastballs from lefties are as good as what he’ll see from Paxton, but the fact still remains. Maybe more interesting is that Brandon Moss, Mike Mosutakas and Eric Hosmer have the next three best averages in that category. What will not surprise you is that Alex Gordon has hit .087 on fastballs from lefties, so maybe he should be the one to sit. Paxton has gone seven innings in four of his last seven starts and hasn’t allowed a run in 17.1 innings.

Hammel continued his impressive run of starts with seven innings against the Red Sox on Sunday, allowing just three runs. He didn’t walk anyone, so now he’s given up three or less runs in 10 of his last 11 starts and has averaged a bit more than six innings per start in that time with a  3.69 ERA. He’s been basically the perfect number four starter. While he didn’t draw the Mariners earlier this year, he’s 3-2 in his career against them with a 3.41 ERA in seven games.

Once one of the best pitchers in baseball, Hernandez is settling into the next phase of his career where he’s merely solid. There’s no shame in that, but it’s just not as much fun for baseball when he’s not great. This season has been a mixed bag. His strikeouts are up from last year and his walks are down, but he’s giving up a ton of homers and a ton of hits and has dealt with injury for the second straight season. The Royals scored six off him in six innings on July 4th this year.

He mixes four pitches well and adds in a fifth. His fastball and sinker average around 91 mph and both move well. His changeup is his bread and butter pitch, which isn’t that bad for the Royals. As a team, they’ve hit .276 on changeups from righties with a .545 slugging percentage this season. Eric Hosmer, Mike Moustakas, Salvador Perez and Lorenzo Cain all have slugging percentages of at least .632 against right-handed changeups. Given Hernandez’s struggles with lefties (.892 OPS allowed), I’d say Hosmer and Moose are good bets to get something going. Hernandez does get better as the game goes along. By times through the order, his OPS allowed goes from .920 to .802 to .774 to .571, so while he’s been hittable as he goes through a lineup, it gets more difficult.

Duffy is coming off another really nice performance against the Orioles where he was able to pick up 11 more swinging strikes out of his 106 pitches. Since coming off the disabled list, he’s gone 3-2 with a 3.20 ERA in six starts over 39.1 innings with 31 strikeouts and an incredible four walks. He’s gone at least seven innings in three of the six starts as well, so he’s giving the Royals plenty of length.

Ramirez is making his second start in his return trip to Seattle. He worked mostly as a reliever for the Rays this season, but did make eight starts for them, so he has some innings under his belt. He has the look of a solid back-of-the-rotation starter with a decent strikeout rate, solid control and probably gives up a few too many home runs. He faced the Royals in relief with the Rays earlier this season and gave up two runs in an inning of work during that series in early May.

Ramirez works with a sinker, cutter and changeup mostly, occasionally mixing in a slider and a four-seam fastball. His changeup use isn’t that heavy, but he does throw it about 22 percent of the time, meaning some of the same guys who might be successful against Hernandez might be successful against Ramirez. Hosmer, Perez, Alex Gordon and Brandon Moss all have homers against him, but the sample is pretty limited among the team with just 65 plate appearances total spread out over 11 batters. Ramirez went just 3.1 innings in his first start with the Mariners, getting up to 58 pitches. I imagine he will still be on a pitch count after spending so much time in the bullpen.

Kennedy is coming off a rough start against the Orioles where he just couldn’t put hitters away and ultimately left too many pitches in hittable spots. Still, the Royals have now won eight of his last 10 starts and he’s posted a 3.95 ERA in that time with just 49 hits allowed in 57 innings. He’s gone six innings or more in seven of those starts as well, so he’s routinely getting the Royals deep into games either with the lead or in striking distance, having left each of his last 10 games with the team either ahead, tied or trailing by no more than two runs.

The Royals are suddenly looking like the April version, which is a bad sign for the playoff hopes. They got to this point right after the All-Star break too, and immediately reeled off nine straight wins, so I’m not willing to say they’re back to the doldrums just yet. Still, it’s concerning and these Mariners are playing well and coming for the Royals in the Wild Card chase. I think the two teams split this series, but I’m worried that the Royals are starting to tumble. Hopefully they can make a correction and pull out of it quickly.

Tags: Danny Duffy, Ian Kennedy, Jason Hammel, Yovani Gallardo |
David Lesky
Follow @dblesky
I've been a Royals fan since the day I was born, and have had the opportunity to write about the Royals for nearly a decade now. The winning was better than the losing, but the losing is kind of familiar at least.
read more from David Lesky