Once again, it was my good fortune to receive a preview copy of Out of the Park Baseball (OOTP). And once again, this year’s game, OOTP19, is a step up from the previous version and a highly enjoyable game.

Last year, I was very excited to play the new version because the developers had done the hard work of adding the complete history of the Negro Leagues to the game. That was a year after they had added complete historical minor league rosters dating back to 1919. With all of that added detail behind them, this year apparently the focus was on improving gameplay. And they succeeded.

My usual focus when I play OOTP is to serve as general manager. The game allows you to play as GM, or manager, or both (or play in commissioner mode, but it’s more fun to me to control one team). That is the main reason I enjoy the game so much—it is a mental challenge rather than a typical video game which emphasizes your reflexes. But I’ll be honest: I found managing games a little boring in previous versions of OOTP. Making the roster moves and simulating games to see the results meant time flew by in the game—a season could be played out in a few hours. But managing a game, even with the ability to see the result of each at-bat with just one button click, made things drag a bit.

But with the improved gameplay, managing a game is much more entertaining now. The biggest changes this year are much better 3D players and stadiums. This means you can watch miniature but lifelike figures run the bases, make diving catches, and even celebrate on the field after a win (no Salvy Splashes, though. Yet.). And you can watch these “players” do this in beautiful renderings of major-league stadiums. Here’s a shot of Kauffman Stadium:

This all adds a feeling of realism to the game, and makes playing through a game instead of simulating it more fun and intriguing, almost like watching a game. I think part of that is that the developers did a great job of getting the little details right. For example, a runner on a single will round first base before retreating, or a player might make a leaping catch at the wall, or the catcher and infielders will throw the ball around the horn after a strikeout. So it does feel a little bit like you’re seeing a game on TV.

Acting as a manager is also more appealing with the improved in-game manager screen. All the info you could need is right there for you, with several widgets that can show or hide even more info—stuff like weather conditions, out of town scores, defensive positioning, and even a graphic showing a Gameday-style pitch plot for the previous hitter. Speaking of defensive positioning, I don’t remember seeing this many options for infield and outfield shifts before. About all that is missing is pulling an outfielder in to be a fifth infielder.

There are plenty of improvements for the general manager types out there, as well. The in-game AI was improved, and so was the roster management and trade decision-making. Even better, the scouting reports have been revamped and improved to add more detail. For example, here are the reports (which seem pretty accurate to me for Mike Moustakas and prospect Richard Lovelady: 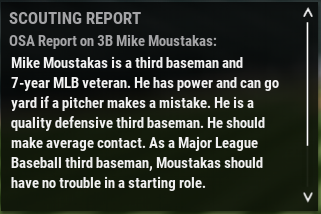 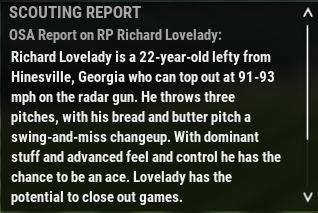 There are a host of other improvements to the overall game experience, too; I’m a big enough nerd to appreciate the ability to change the fonts, but stuff like user voting for year-end awards, tournament modes, and 800 custom team logos for fictional leagues ought to excite just about everyone who is interested in creating their own league or taking over a current or historical team. If you’ve ever wondered if you could do a better job than a general manager or manager, OOTP is the game for you.

Tags: Out Of The Park Baseball, reviews |
Darin Watson
Follow @@Darin_Watson
I grew up in Topeka, and learned to love the Royals over many summer nights listening to Denny Matthews and Fred White. Of course, the Royals were easy to love back then. They got their claws in me over 30 years ago, then they went to the playoffs in 1984 and won it all in 1985. And I thought to myself, "This is easy. This team is always going to be good!" Sigh. But now that they are good again, I'll be sure not to take it for granted. I promise. I'm also a fan of the Chiefs, Jayhawks (yes, even the football team), Sporting KC, and the Nashville Predators. By day, I'm a mild-mannered project manager for a publishing company, and every night I'm lucky to come home to my amazing wife Michelle. We've been married since 2005 and live in Overland Park. Fun fact, she grew up in Memphis watching many future Royals when Kansas City's AA team was there. So it didn't take much to make a Royals fan out of her. We don't have kids, but we've got three cats (including one named after Alex Gordon), and a dog.
read more from Darin Watson