The Royals will complete their home and home series with the Brewers with two games at Miller Park in Milwaukee. This is the Royals fourth trip to the stadium since it opened with the Royals holding a 5-3 record there. The Brewers, though, are quite good and the Royals are quite not, so to improve on that record will prove to likely be a challenge for the boys in blue. While the Brewers aren’t a perfect team, they have great lineup balance, led by a surprising Jesus Aguilar and a not surprising Lorenzo Cain and Christian Yelich. Their rotation has been fine, though if they’re looking to upgrade one particular part of the team, that would be it. And their bullpen, with the amazing Josh Hader and his team leading 80 strikeouts in just 39.2 innings, is fantastic. This is a really good team.

Update: Lorenzo Cain is on the DL. This is still a really good team, but this series is less entertaining now. 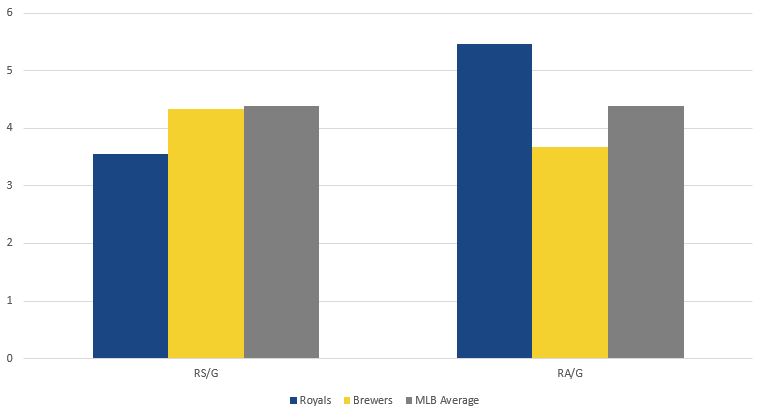 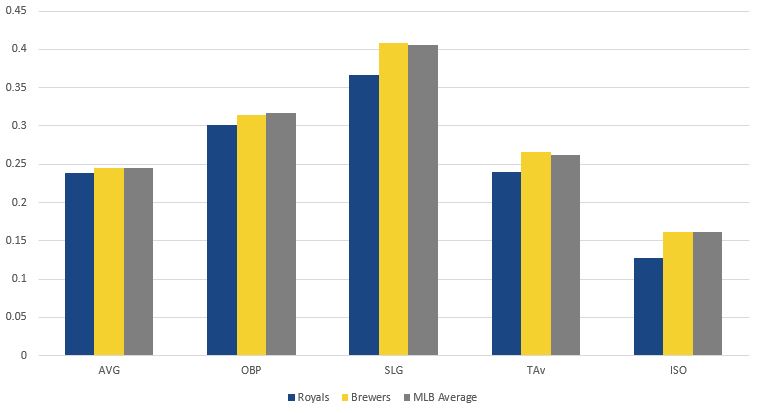 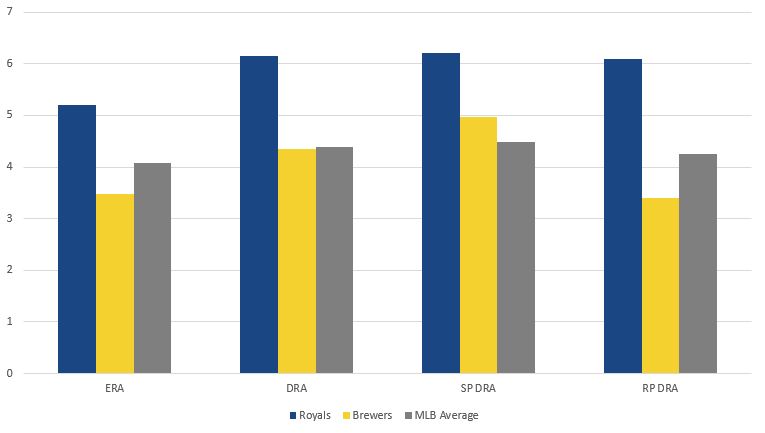 Peralta is interesting to say the least. He’s made three big league starts and has struck out 41 percent of the batters he’s faced. But he’s not overpowering and he doesn’t do it with a ridiculous breaking ball. In fact, he throws his four-seamer nearly 84 percent of the time. He has a very good spin rate on it, which makes it tough to pick up, so that explains a fair amount of it, but what he’s done in his first three starts is actually kind of absurd. He has thrown nearly 18 pitches per inning, so there’s a price to pay, but that’s a bit skewed by a game against the Twins where he walked six in four innings. Maybe more impressive even than his big league debut so far is the fact that he allowed just one home run while pitching 26.2 innings in Colorado Springs. That home run? Against the Omaha Storm Chasers and specifically Royals great Billy Burns. He’s dominated both lefties and righties, but lefties at least have been a little better against him with a .227/.322/.328 line vs. the .256/.247/.199 line righties have put up. No Royals have obviously faced him in the big leagues, but Hunter Dozier did go 1-for-3 against him in that game in April.

Junis has allowed at least three runs in each of his last five starts, watching his ERA jump from 3.52 to 4.43 in that time. He’s had some issues with the home run ball, but those are sort of fleeting with 14 of the 19 homers allowed coming in just four of his 15 starts this year. In his last start, control as the issue with four walks allowed in six innings. It was the second time this season he’d walked four, but the first time he did it, he was getting swings and misses. In this past start, that wasn’t the case and it hasn’t been the case now for two straight starts. This is a Brewers club that will swing and miss, so if the slider is working for him, he could have a big strikeout game. They also don’t walk a ton, so maybe he can get going again in this game, though if his slider is flat, which it has been at times recently, the power the Brewers have will punish him.

Suter has been a pretty important pitcher for the Brewers over the last couple seasons, putting up decent numbers between the rotation and the bullpen and this year has been a more prominent member of the rotation. This start will give him a career-high 15, and he’s been pretty solid. He hardly walks anyone and he strikes out enough given that fact. He hasn’t had too much of a home run problem either. He’s just a solid middle of the rotation type arm. He’s a pretty classic “crafty” lefty in that he throws his fastball at about 87-88. He throws it a lot too, roughly two-thirds of the time, and gets pretty good results on it with a .248 average allowed and .417 SLG. He also has a changeup and slider and a very occasional curve that he’ll use more on righties than lefties. The changeup has gotten him into some trouble with a .576 SLG allowed on it in 33 at bats. One area that’s given him trouble is pitching with runners on base. Luckily for him, the Royals don’t get on base much and when they do, they fail to score most of the time, so he should see his numbers get a bump. He’s also interesting in that he doesn’t have issues the third time through. In fact, his OPS allowed the first time is .814 and then that drops to .675 and .643 the next two times through the order. No Royals hitters have faced him in the big leagues.

I was really impressed with Duffy on Friday against Houston. It’s not just that he threw six shutout innings but that he did it against a team like that after seeing them just a few days before. In his last six starts now, he’s gone 2-1 with a 2.87 ERA and is getting back to being the Duffy we thought he could be. He isn’t allowing many hits (just 27 in those 37.2 innings) and has limited home runs well as well. It’s a nice change of pace for him. What might be even more impressive in his last start is that he did it without an especially good changeup, which is rare for him. His slider was the pitch that paced the night, and that’s a great sign because of all the trouble he had with it earlier in the season. He had 13 total swings and misses and featured excellent velocity as well. All in all, that’s a very encouraging outing. The Brewers have had some trouble with lefties as well, hitting just .218/.297/.367 against them, so while they’re a good offensive club, this is an opportunity for Duffy to continue his strong run of starts. He’s never actually faced Milwaukee, and the only Brewers hitter he’s faced more than a couple times is Brad Miller who he’s held to just three hits in 13 at bats with four strikeouts.

Tags: Brent Suter, Danny Duffy, Freddy Peralta, Jakob Junis |
David Lesky
Follow @dblesky
I've been a Royals fan since the day I was born, and have had the opportunity to write about the Royals for nearly a decade now. The winning was better than the losing, but the losing is kind of familiar at least.
read more from David Lesky