Alcides Escobar has no business hitting at the top of the order for a major league baseball team.

Whew. Felt good to get that off my chest. Like ripping the Band-Aid off, right there. Just grab it, pull and get it over with.

In September, 2014, Ned Yost put Escobar at the top of his lineup. The Royals caught fire, qualified for the Wild Card, and ripped through October all the way to the seventh game of the World Series. That was enough to convince Yost that Escobar was his man at the top of the lineup, now and forever. While the Royals do things that aren’t “statifiable,” this was a confounding move given Escobar’s inability to swing anything resembling an average bat. Yet the Royals winning continued, unencumbered by the quantity of outs at the top of the order. Escobar finished 2015 hitting .257/.293/.320 with a  .224 TAv.

A year later and Escobar is still at the top of the order, and the Royals are off to a slow offensive start, averaging just 3.67 runs per game. A scapegoat is necessary, and Escobar, as noted above, is one of the worst offenders in the current lineup. Is it too early to make a change to shuffle the order? I don’t think so, if only because Escobar should never have been hitting leadoff to start.

The Escobar Truthers would prefer the status quo. “Keep Esky leadoff!” is their mantra. The pro-Escobar leadoff argument is summed up in a World Series championship. To be honest, that’s a damn persuasive argument. Trophies and flags say a lot.

But this is baseball. Teams change and this is a new season. The Royals lineup is different from last year. Their won-loss record from 2015 and the new flag flying over the Royals Hall of Fame building doesn’t matter a lick in 2016. It’s great the Royals brought back the majority of their players from their World Championship team, but they must always be looking for ways to improve. Because the four clubs in their division and the 10 other teams in the league are out for their pennant. Just throwing the same recipe out there year after year isn’t going to be good enough. Changes must be made. Improvement must be sought.

Lineup construction is generally an overrated exercise. For the most part, batting order isn’t super relevant. Eric Hosmer is going to get his hacks, no matter where he hits. Same for Mike Moustakas, Lorenzo Cain, and the rest of the guys. If you were to pin me down on a lineup, I would venture you should stack your best hitters at the top and make damn sure your six best hitters fill the first six spots. Leave the scraps at seven, eight, and nine to your scrub hitters.

It’s better to present this in visual fashion. Here’s a table of the Royals lineup from 2015, split by position in the order. They did stack their best hitters together last year. With a notable blemish at the top.

Go back a few paragraphs to where I write lineup construction is an overrated exercise. I’m talking about when the discussion is something like, should Kendrys Morales hit fifth, or do you prefer him fourth? That’s splitting lineup hairs, the difference is about 20 plate appearances. But when you’re hitting a guy leadoff who is better suited for the bottom third of the order, the table above illustrates it’s kind of big deal.

In fact, the Royals production from the leadoff spot last year, was the worst in the league. By a fairly large margin. 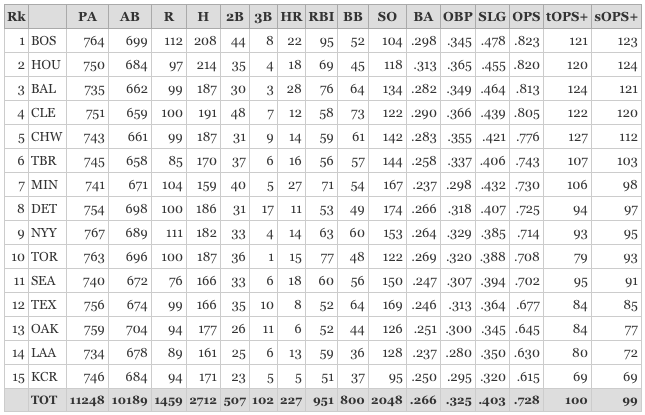 By willfully giving over 100 more plate appearances to an offensive liability like Escobar, the Royals are committing a form of offensive malpractice. Especially when the evidence is so clear.

The inanity of batting Escobar leadoff affects other hitters, too. With Yost’s automatic lineup in place, the three most common batters ahead of Moustakas this year has been Omar Infante, a combination of Paulo Orlando, Reymond Fuentes and now Jarrod Dyson, and Escobar. In 79 plate appearances this year, Moustakas has come to the plate with a total of 38 runners on base. Of those base runners, 19 have been in scoring position. That’s simply not good enough. The average MLB player with the same number of plate appearances as Moustakas has come to bat with 46 runners on base.

Moustakas, despite crushing the baseball, has cashed in a total of 11 RBI. Of his seven home runs, only one has come with a runner on base. One. That seems like a low statistical probability for a player hitting anywhere in a batting order to hit seven home runs, but drive in just eight with those bombs. Moustakas has brought home Escobar twice and has scored Drew Butera and Infante once each.

We can joke about #PeakEscobar and about how fun it is when he swings at the first pitch of the game, but it’s getting out of hand. Through his first 21 games, Escobar is seeing 3.24 pitches per plate appearance. By far the least on the Royals, and in the AL that ranks him 94th out of 96 qualified hitters. He’s chasing over 41 percent of pitches he sees out of the strike zone. He’s always been undisciplined at the plate, but he’s actually getting worse. And even if he turns it around and finds a little patience and discipline, his track record tells us it still won’t be enough.

If I had the opportunity to produce a lineup card, it would look something like this:

That’s the best long-term solution in my opinion. (I threw Christian Colon in there as some wishful thinking. But that’s another post.) It gets your best five or six hitters at the top of the order, which is exactly what you want. It stacks a couple of left-handed bats together at the top, which probably gives Yost a gentle spasm, but three of your top five bats hit from the same side, that has to happen at some point.

Given Jarrod Dyson’s start to the season, his lack of strikeouts and game-changing speed, I could see this kind of lineup against RHP:

That’s just a simple flip-flop of Dyson and Escobar in the order and it keeps the RLRL order going. I’m not sold that Dyson can provide what you need from a leadoff hitter in the long-term, but I am sold that he’s a better option at this moment.

To say the Royals won last year because Escobar hit leadoff is to conveniently ignore the numbers and Escobar’s own profile as a hitter. The Royals won because they had exceptional defense, a lock-down bullpen, and a stout heart of the order that could compensate for four positions of the batting order producing at a below average clip. The Royals didn’t have a losing September because Yost moved Escobar from the top of the order. They lost in September because Lorenzo Cain, Eric Hosmer, Ben Zobrist, and Alex Gordon – the heart of the order – all slumped at the same time, producing an collective OPS+ of around 78.

Again, this is about looking at a very good baseball team and finding ways they can get better. Just like he isn’t responsible for all the wins the last two years, Escobar isn’t the only reason the lineup is scuffling to score runs in 2016. If Escobar was a good hitter, this article wouldn’t exist. (Notice how no one is saying anything about moving Lorenzo Cain out of the number three spot? That’s because he’s actually a productive hitter. He has earned the opportunity to get out of his slump.) But Escobar has never been a good leadoff hitter and has never belonged at the top of the order. The Royals won, but it’s never too late to look for ways you can improve.

The Royals are a good team with postseason aspirations. They can be an even better team if the decide to move Escobar out of the leadoff spot.

Tags: Alcides Escobar |
Craig Brown
Follow @CraigBrown_BP
Craig has been covering the Royals at various outlets for 14 years. His work has appeared at various websites, including Sports On Earth, Baseball Prospectus, ESPN, The Hardball Times, and SB Nation. Reach him at craig.brown@baseballprospectus.com.
read more from Craig Brown

The Royals won with him leadoff because Esky has a cumulative postseason stat line of .311/.326/.467 with a .793 OPS. He got hot when it mattered. He is no longer hot nor can he stay hot for a full season.