Down a run with four outs remaining, the Royals needed a hero. Whit Merrifield had done all he could, homering in the third to pull the game level. After providing all the Royals offense for a game and a half, it was time for someone else to shoulder the load.

How about Salvador Perez? Just another night at The K.

First pitch swinging, Perez caught a cut fastball down and in. He didn’t miss. 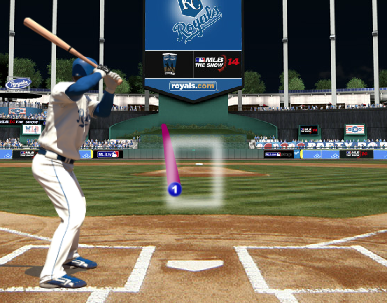 On a night the Royals offense was held off the scoreboard, they needed a bomb. The lineup has racked up the hits in this Cleveland series, but the runs just haven’t been there. In the two games to open the homestand, the Royals have 20 hits, but just five runs. Yet – and this is important – they have two wins. That’s really the story of the Royals offense in 2016. Frustrating and not used to needing to wait for the big bomb, it’s exhilarating when it finally comes.

When Perez’s blast cleared the fence just in front of the fountains in left-center, it maybe gained an extra row or two as the crowd issued a collective exhale. The game was touch and go all night. Maybe this would be the difference.

With expectations low, Chris Young did his job and kept the Royals in the game. On a pitch count of around 85 on his second start in his most recent return to the rotation, Young ran through that limit in a hurry. That’s what happens when you allow at least one baserunner in every inning. On the plus side of the ledger, Young kept the home run at bay for the most part. The only blemish was a Carlos Santana blast leading off the third. Young has now allowed 18 home runs in around 45 innings after surrendering 16 home runs in 123 innings for the Royals last year. For those of you without an abacus, his HR/9 rate has tripled.

Young’s fly ball rate is about the same from last year, but his HR/FB is a whopping 25 percent. That’s obscene. And unsustainable. While Young enjoyed probably more than his share of good fortune on batted balls last year, the pendulum has swung to the other extreme so far in 2016. It’s unfortunate, but it’s reality. The Royals can expect some regression to the mean, but the fact remains Young is a fly ball pitcher. Homers happen.

Young tired in the fifth, issuing back to back walks before Ned Yost made the call to the bullpen. That’s kind of been Yost’s story this year on bullpen management. Desperately seeking to squeeze one more inning from his starter, he leaves them in just too long. With Young’s pitch count at 85, it probably would have been better to pull him as that number approached, instead of taking the over. Young is a guy who has battled his stamina in the past. It just doesn’t seem wise to push him while he’s being stretched back out in the rotation. Although it’s understandable that Yost would want to see if he could survive five.

The legend of Merrifield continued to grow as he clubbed his second home run in as many days and also came up with a couple of sterling plays on defense. At this point, what can we say about Whit? The guy has been an injection of fun. A folk hero the defending champs needed so badly. Keep on, keeping on.

Soria Closes It Out

With Kelvin Herrera and Wade Davis unavailable after pitching three consecutive days, Yost turned to Joakim Soria for the five-out save. It wasn’t smooth. It wasn’t without it’s moments. But Soria slammed the door shut, retiring the pesky Jason Kipnis to secure the win. The bottom line, he got the job done.

Soria threw 30 pitches, 19 of them for strikes. He whiffed two and got three swings and misses on seven change-ups. He wriggled out of trouble that Gee left in the eighth, entering with two on and one out. Soria returned for the ninth and worked around a hit and a walk of his own.

I don’t have to tell you this, but bullpen depth is everything for this Royals team. Dillon Gee kept the game close in relief for Young and then Soria did his thing.

The Royals have shaved two games off the Indians lead in the Central and turn to Ian Kennedy to go for the sweep. Corey Kluber takes the mound for Cleveland in a 7:15 start.