A hallmark of this Royals team through the first couple months of the season was their inability to beat the lesser teams of the American League. Before they embarked on their West Coast road trip, the team held an 8-10 mark against teams with a sub-.500 record. That’s not particularly good, even with the small overall sample of 18 games.

Good teams beat the lesser teams. That the Royals were struggling against their fellow bottom feeders wasn’t exactly encouraging.

So thank you, San Diego and San Francisco. And in a couple of days, you too, Angels of Anaheim.

(That “teams under .500” a bit of a dodgy statistic because the .500 bar is constantly moving. If the Angels win their next game, they’re back above the threshold and the Royals lose six wins from their current 15-12 record. But at this point in the season, it serves to make a different point. Read on.)

On a road trip where it was imperative the Royals win at least seven games, they did just that, at one point ripping off six consecutive wins for their longest winning streak of the season. Finally, they found a way to defeat the teams they should beat. And in a logjam of an American League, that meant they gained some decent ground. They left Kansas City over a week ago with the third worst record in the AL and trailing the Twins in the Central by 5.5 games. They return home just 1.5 games behind Minnesota (who got blitzed over the weekend by Cleveland and finally fell out of first), 3.5 games out of first in the Central and now just two games out of the Wild Card.

This season is nuts. Really. Just 4.5 games separates Tampa – currently the second Wild Card team – and Oakland – the team with the worst record in the AL. That the Royals were able to make a move at this point isn’t surprising. A modest winning streak in such a tight league means climbing up the ladder. However, the excitement of jumping back into the race is tempered just a bit by the reality they don’t play in a vacuum.

That’s to say, thanks to their early season struggles and the fact they’ve been at or near the bottom of the league all season, it means they have to find a way to leapfrog several other teams to maneuver into a postseason position. Take the aforementioned Indians as an example. They, too, won six games in a row this week. However, they started the week just 1.5 games back of first, just behind the Twins, so their success in Minneapolis this weekend pushed them to the top of the pile in the Central. Because the Royals started much further back, they have several other teams to pass. That’s not exactly breaking news, but it’s something to consider over the next several weeks as the teams in the lower half of the league continue to jockey for position.

Are the Royals out of it? Absolutely not. The problem is, they’re one of 14 teams vying for four spots. (The Astros have lapped the field in the West.) Their road trip was a resounding success. Now, they have to build on the California wins and stay hot. Position will mean everything. Not just for the trade deadline, but once the races really catch fire.

Still, how about that offense?

The Royals posted a double-digit hit total for the fifth time in six games, pacing the way for their 7-3 victory on Sunday. They scored 55 runs over the nine games, an average of 6.1 R/G. Compare that to their season average of 3.96 R/G. They are so knocking on the door of averaging four runs per game. And that includes getting shutout on Saturday in LA!

As a team on the trip, they knocked 20 doubles and 18 home runs. Of course, most of the taters were mashed by Lorenzo Cain. The dude is scorching hot. From Texas Leaguers, his spray chart since the calendar flipped to June is impressive as hell. 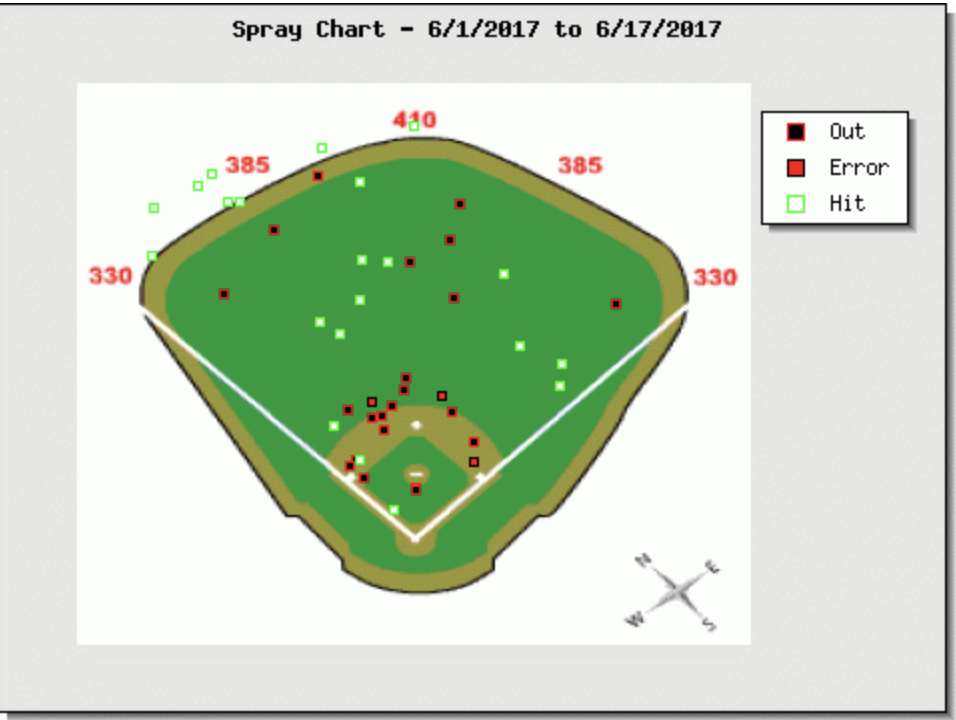 In his June plate appearances, here are the most common outcomes:

What can you say? Lean back, LoCain. Lean back.

To tie back in to my article about the Royals and their team power from last week, of those 18 home runs they hit on the road trip, 29 runs scored as a result. Since they plated 55 runs total in the nine games, that works out to about 53 percent of their runs were scored thanks to the home run. And that’s with a game where they scored eight without leaving the yard. (It’s tough to hit one out in San Francisco.)

That’s a higher percentage than their team average (around 44 percent) from when I wrote the article on Wednesday, but it’s close.

Now they return to The K and some warm Kansas City summer weather against a couple of pitching staffs in Boston and Toronto that are around the league average in surrendering dingers. If you were the wagering sort, it could be worth getting some money on the power barrage continuing.

This is a hot team. They’ve won 11 out of 16 in June. And you know what that means, right? They’re just four consecutive wins from setting off another patented 15 out of 20 run.

Hold on to your butts.

Tags: Lorenzo Cain |
Craig Brown
Follow @CraigBrown_BP
Craig has been covering the Royals at various outlets for 14 years. His work has appeared at various websites, including Sports On Earth, Baseball Prospectus, ESPN, The Hardball Times, and SB Nation. Reach him at craig.brown@baseballprospectus.com.
read more from Craig Brown