If nothing else, the Royals next opponent, the Tampa Bays, are interesting. Because of the American League and the American League East specifically, they have no chance to compete for a playoff spot, so they were pretty significant sellers at the deadline, and even before, having made a relatively big trade before anyone. But even so, they’re pretty fun. Offensively they don’t hit for much power, but they do pretty well otherwise, and they have a speed game going on with lots of steals. Their rotation is hard to pin down because they utilize “The Opener” so often with guys like Ryne Stanek a lot and now Hunter Wood. And their bullpen has a lot of really nice pieces, but it’s just really tough to categorize so much of their staff. And, you know what? It’s kind of working, although they are finding themselves in the dreaded middle ground where the Royals were for the last couple years, so maybe it’s not so great. 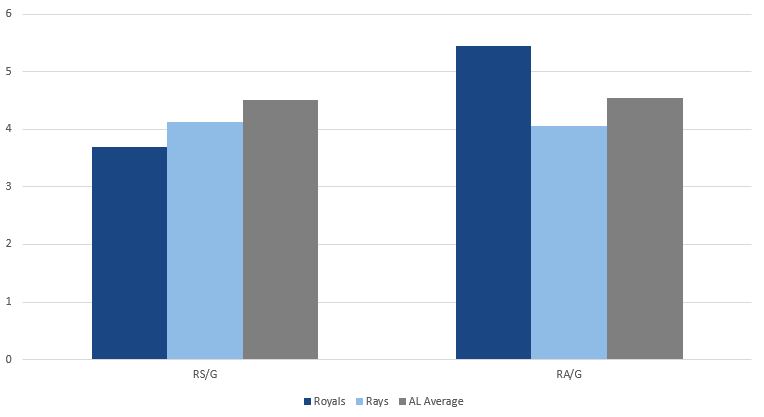 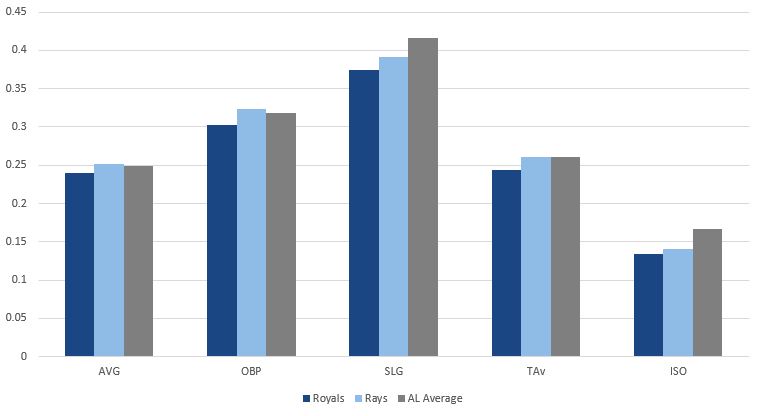 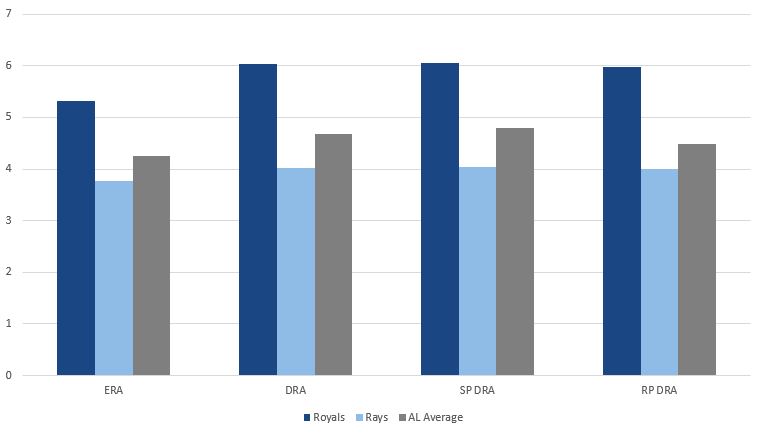 Wood has made good on his opportunity this year, working as an Opener for the Rays quite a bit (this is his eighth start, none longer than two innings). He’s been much better actually coming out of the bullpen, though, with a 4.76 ERA in seven starts, albeit with way more strikeouts than in his nine appearances coming in during the middle of the game. With the Royals starting four lefties and Ryan Yarbrough having last pitched five days ago, he seems like a likely successor to Wood in this one. Yarbrough shut down the Royals moderately well when he faced them in May in a traditional start, going five innings and allowing just one run on five hits. He’s thrown two straight scoreless outings, but things have been a bit rocky for him in general after a run of three straight solid outings. He’s posted a 4.59 ERA over his last 66.2 innings, so not horrible, but definitely room for improvement.

Lopez will make his second start with the Royals, and while the numbers weren’t there for him in his first start, I think there were some positive signs. I do believe the stuff is there for him, and while I believe he’s a reliever in the long-term, it’s a great opportunity for him to showcase that maybe he can be more over the next few weeks as the season comes to a close. One thing that I found interesting in his first start was that he got 16 fly balls and just two ground balls, which is sort of the opposite profile the Royals had been going after in acquiring pitchers over the last few seasons. If home runs and offense continue to decline, he could have success in the way previous Royals pitchers have with that profile. If not, he’ll be in trouble the way previous Royals pitchers have with that profile.

If not for his injury and general lack of innings per start, Snell would be a legitimate Cy Young candidate. Maybe he should be even with a low inning total because he’s having an absolutely phenomenal season. The stuff has always been there for him, but after a couple of average seasons, it looked like maybe he’d be one of those pitchers who just never completely unlocked it. This year, though, he’s striking out a ton of hitters, limiting walks better than he ever has before and has been incredibly stingy with hits, allowing just 85 in 133 innings. That’s crazy. People aren’t going to like this, but the Royals need to go full-on righty in this one. Snell has allowed a .125/.195/.192 line to lefties this season, so you can tell me all day that guys like Brett Phillips and Ryan O’Hearn need to hit lefties sometime, but yikes, this isn’t that time. Plus, he has a 0.97 ERA at home this season. Granted, it’s nine starts, but if you were betting on no-hitters being thrown, this wouldn’t be the worst one to bet on.

Sparkman, like Lopez, will get his second start with the Royals. He should be clear for 90 pitches or so in this one after throwing 75 in his start against the Blue Jays, so we’ll get a good opportunity to see him a little bit more in this game. He was good in his four innings on Thursday, but one thing that stood out to me was 12 swinging strikes in his 75 pitches. That’s really impressive. His slider was really amazing with eight swings and misses on 26 pitches thrown. If he can continue to flash that, there’s an opportunity for him to actually be a quality big league starter. Even if not, it does lend credence to my belief that he has a chance to be a really solid big league reliever. Either way, that’s a nice outcome for a guy they lost in the Rule 5 draft at one point.

We’ll update with the Rays starter as soon as it becomes available. My guess is this is going to be Ryne Stanek. He’s been their opener extraordinaire, which is obviously a little different than a starter. Stanek has really blossomed in his second big league season, striking out a ton of hitters and generally giving offenses a lot of trouble early in games. As the opener, he’s struck out quite a few more hitters but also has given up home runs at a slightly higher rate and has been maybe slightly more hittable. He’s really not someone you can count on for more than 20-25 pitches, though as he is a much different pitcher when he’s worked past that 25 pitch mark. Yonny Chirinos is a good bet to be the primary pitcher for the Rays in this one. He went six innings in his last outing, allowing five runs on nine hits with just one strikeout against the Red Sox.

I really like a lot of what I’ve seen from Junis since he went on the disabled list, so I’m beginning to wonder if that back injury really was the problem for him during his rough stretch earlier this season. Since he came back, he’s thrown 30.2 innings and struck out 35 while walking 12 and, maybe most importantly, allowing just two home runs. His command has been a little wonky with those 12 walks and four HBP as well, but I think that’s actually helping him. He has allowed 32 hits since coming back, but a .357 BABIP says there should be some regression there, which can propel him back to similar numbers to what he was showing earlier this year. He pitched twice against the Rays last year, once in relief, and gave up just one run on three hits in 6.2 innings while striking out 10 and walking two. This Rays team is very different than last year’s, but maybe he can continue that in this one.

After acquiring Glasnow from the Pirates, there was a question about how he’d be used. I think a lot of people expected that he’d be another opener in their bullpen/rotation given that he’d been pitching out of the bullpen in Pittsburgh. But he’s started and increased his innings in each start. His first three went incredibly well, but he struggled a bit in the fourth start, giving up five runs on three hits in 6.2 innings. Walks were a big problem for him in Pittsburgh that didn’t follow him until his last start when he walked three. He also saw his whiffs drop considerably, getting only five swings and misses when he was stretched out. Now, all that said, the Red Sox are the best team in baseball and an incredibly difficult lineup to face. The Royals, well, aren’t. As a pitcher with an amazing minor league track record, Glasnow could very well be coming into his own. He’s a fastball/curve guy with a very hard fastball and a curve that is a big-time strikeout pitch, but I honestly don’t know what to expect out of this start. I get a bit of a Reynaldo Lopez vibe from him and the Royals did just mash him on Sunday. But then again, they’re also the Royals, so it’s pretty clear that they’re capable of being shut out by anyone.

The Royals starter will be updated once we know. That said, there’s a pretty decent chance it’s Danny Duffy, returning to the scene of the best pitching performance of his career when he struck out 16 and allowed just one hit over eight innings, so that could be fun.

I honestly don’t know what to expect of this series. The Rays are just okay, but they can be a lot of fun. I think the Royals snag one of the four and continue the slow march to the end of the season that feels like it might never come.

Tags: Blake Snell, Danny Duffy, Glenn Sparkman, Jakob Junis, Jorge Lopez, Ryne Stanek, Tyler Glasnow |
David Lesky
Follow @dblesky
I've been a Royals fan since the day I was born, and have had the opportunity to write about the Royals for nearly a decade now. The winning was better than the losing, but the losing is kind of familiar at least.
read more from David Lesky