“That’s one thing I hate hearing is ‘sorry’ after a reliever has a tough go. Don’t apologize.”

That’s Danny Duffy commenting on the Royals bullpen after yet another blown lead. This time, Duffy was the victim. He shoved in game two of the twin bill in Toronto. After a pair of rocky first innings when his fastball velocity was less than optimal, the left-hander was touching 95 mph on the regular and missing bats with his off speed offerings. It was an encouraging from the Royals de facto ace.

The temptation would be to bemoan that Duffy’s effort went for nothing. After all, he exited the game after 100 pitches and six shutout innings. In the halcyon days of 2014 and ’15, that was good enough for a win. Times are different.

To circle back to Duffy’s comment, can we take a moment to think about how these relievers must feel after doing their gas can imitation? It’s their job to protect the lead. That’s the bottom line, but that’s simplistic. You have Duffy who fixed his first inning issues and dealt all night. You have a team that has struggled for any kind of victory. You need to record nine outs while preventing the other team from scoring more than twice.

It shouldn’t be this difficult.

So they apologized. There’s a human element to this game that’s easy to overlook. Justin Grimm and Brad Keller have to feel horrible. It’s not like they’re doing this on purpose. This doesn’t look like the pitching chart of someone who had any kind of control over where the ball was going once it rolled off his fingertips. 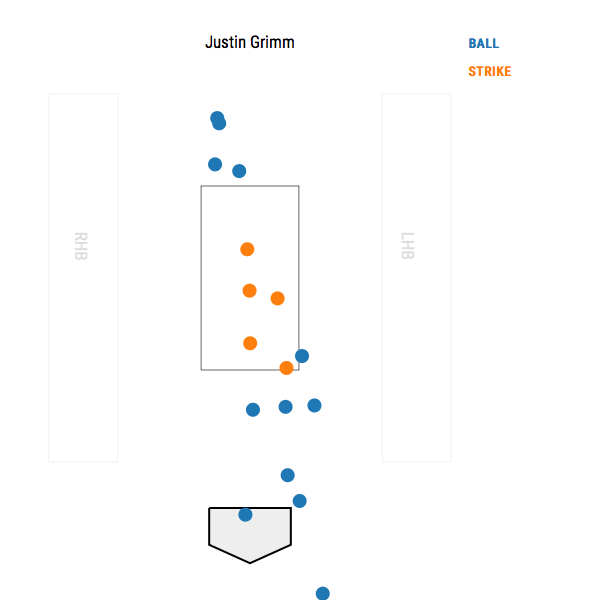 My god. These weren’t even close. Grimm threw 17 pitches and got just two swings. The fastball was all over the place. The four lowest pitches were his curves.

It’s not like Ned Yost has a plethora of relief options. He knows this. “It is a bit of a struggle right now. Grimm just could not find his slot today. He just couldn’t do it”

We can have empathy for the relief corps while staring the truth square in the eye: There’s no one in this bullpen who can be trusted outside of Kelvin Herrera. And the Royals starters aren’t going eight innings, nor is Herrera going to be asked to get a six (or nine) out save. This is how it’s going to be in Kansas City this summer. Buckle up? Hell, get me the horse tranquilizers. That’s the only way to deal with this version of bullpen roulette.

The Royals have the worst bullpen in the American League. That’s not just some kind of rant after a tough late inning loss. That’s a fact.

Yost excelled when the bullpen excelled. The relievers had their roles and Yost was able to go on sort of a managerial autopilot if the Royals entered the seventh with a lead. The fear was once Yost had to find new pitchers for roles, all bullpen hell would break loose. Turns out, no matter who he summons from the pen, nothing works. Sure, he likes his veterans, but what we’ve seen so far is no fault of the manager. The talent just isn’t there. No matter who comes in to the game. “Everybody’s got a job to do. We’ve just got to do it. If you’re up three runs, it’s your job to hold the fort. Right now, we’ve just been kind of struggling to do that,” Yost said after the Royals’ latest loss.

And let’s not forget Blaine Boyer, who appeared in game one and turned a two run deficit into an eight run deficit. It’s not the same as a late blown lead, and it’s not like you can trust the Royals offense to plate more than three runs in a game, but that kind of lets the air out of the tires. If you haven’t been punished enough, Colby wrote about Boyer over the weekend. (He was going to write about Boyer and Brandon Maurer, but the latter was mercifully shipped to Omaha before we could hit the “publish” button. Colby’s loss was Omaha’s gain.)

If you’re the type who looks on the bright side, there is plenty to like about these first few weeks of the lost season. Really. Herrera, as noted, is dealing. If he can stay on that kind of path, he should command a premium at the deadline. (He also doesn’t figure to get many save opportunities, so his exposure to high leverage situations will likely be limited. Given the volatility of the relief market, that could be a good thing.)

Meanwhile, Mike Moustakas is punishing baseballs. It’s almost like he’s making some sort of statement about being overlooked on the free agent market. I’ve written many times that the transformation of Moustakas into a professional hitter was both unexpected and delightful. If things work out, he can get dealt to a contender, help them in to October and then cash in in what would essentially be a free agent do-over. In a roundabout way, it could work out better for Moustakas than it did for Hosmer and Cain. Still a long way to go in the season, but sometimes crazy things happen.

Lucas Duda is bringing the thunder and Jon Jay is some kind of on base machine. These two won’t command the bounty the Royals should receive for Moustakas or Herrera, but there will be takers for their production that should net some inventory as the Royals attempt to rebuild the farm. Any positive Duffy starts like we saw on Tuesday only builds trade value. Whit Merrifield’s contract status mean he could be sought after as well. With Duffy, Moustakas and Herrera, the Royals have three strong trade chips. Combine any one of those players with a Duda or Jay and you can only enhance the package you receive in return.

It’s a lost season, but all is not lost. The Royals refuse to say they are tanking, and maybe they aren’t, but they are in a position to do something positive for the long term future of the franchise.

3 comments on “For the Royals bullpen, sorry isn’t the hardest word”

Hi Craig,
Totally agree with you. Sorry is not the hardest word in this case.

Grimm kept leaving his fastball up. I’m no pitching coach, but it looked like he was not finishing his pitches on TV. Probably much more complicated than that, but Royals have to find some arms for the pen.